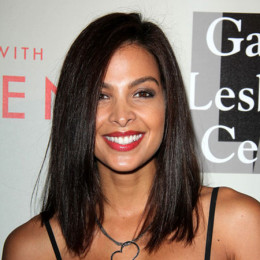 An American film and television actress who is better known for portraying the role of Kali on the drama Teen Wolf alongside Tyler Posey. She is daughter to Caucasian mother and African American father. Before starting her career as actress she entered pharmaceutical sales. In 2007 she got relocated to Los Angeles where she joined acting classes through which she got acting opportunities. She has starred in TV series like Entourage, Marvel's Agents of S.H.I.E.L.D. and Days of Our Lives. She has also starred in the movie named Get Smart.

Talking about her marital status she has not married yet. She has maintained a very low profile regarding her private life. She was also briefly engaged to her boyfriend who was Cincinnati Bengals' wide receiver, unfortunately, they called off their engagement due to some personal issue.

Secondly, shew as in a relationship with her boyfriend with whom she lived together for a year but the news regarding their breakup hit the news after she filed a case against him for domestic violence. She has not been a biological mother yet.

Felisha Terrell was born on March 16, 1979, in  Chicago, Illinois to Caucasian mother and an African-American father. She started her acting career in 2008 in the movie Get Smart. The same year, she featured in the TV series Entourage.

The following year, Terrell got her big break after she cast in the contract role of Arianna Hernandez on the soap opera Days of Our Lives.

Felisha Terrell is possibly single at the moment. She is quite secretive about her personal life especially when it comes about her boyfriend and love affairs.