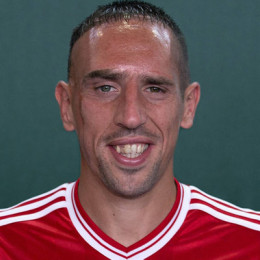 Franck Ribéry is a professional football player who plays as a winger for the popular German club, Bayern Munich. Started his career as a youth player in 1989, he has played for several clubs and leagues in his career. He has the net worth of $70 million. Currently, he plays for German club Bayern Munich while he is a former France national team player.

Ribéry was born on April 7, 1983, in Boulogne-sur-Mer in the suburbs of Pas-de-Calais, France. He is a French who belongs to the Caucasian ethnicity.

His family went through a car accident when Ribéry was 2 years old; leaving two long prominent scars on Ribéry's right side of his face and along the brow. He has a younger brother named Francois who is also a football player. Francois played in amateur football clubs and in the Champion at National played for Bayonne.

Ribéry started his football career at the age of six. He played in the youth section of the amateur club, FC Conti de Boulogne-sur-Mer.

Franck Ribéry is married and has four children. He married Wahiba Robery, who is of Algerian French descent. They have two daughters named Hiziya and Shahinez, and two sons named Seif el Islam and Mohammed. Franck has converted his religion to Islam and adopted the name, Bilal Yusuf Mohammed following the conversion.

Ribéry and a fellow teammate were involved in a prostitution case in Paris nightclubs involving underage women. They were indicted on the charge of "solicitation of a minor prostitute." But the charges were dropped with the reason being the players' unawareness to the fact that their escort was 16 years old.

Ribéry stands the height of 1.7 meters (5 feet 7 inches). He has earned a huge amount of money from his playing career. He has a salary of $17 million. He has the net worth of $70 million.

He joined the German club Bayern Munich for a then club-record fee of €25 million in 2007.

Franck Ribery got engaged to his now wife Wahiba Ribery, who is of French nationality of Algerian descent. Ribery has claimed that his wife who is his childhood sweetheart was a major factor in his conversion to Islam in 2002. His muslim name is Bilal Yusuf Mohammed. Franck and his wife Wahiba have two daughters - Hizya Ribery (2005), Shakinez Ribery (2008) and a son Salif Ribery (2011).

Hizya Ribery is the eldest daughter of french footballer Franck Ribery and his wife Hizya Ribery.

Shaninez Ribery is the second child of french footballer Franck Ribery and his wife Hizya Ribery.

On September 2011, french footballer Franck Ribery and his wife Wahiba Ribery had their third child Seif - their youngest among three children.