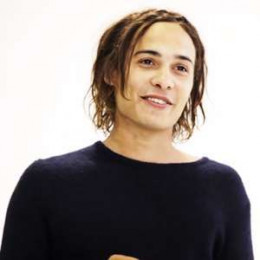 Frank Dillane is an English actor, known for playing Tom Riddle in Harry Potter. He is the son of actor Stephen Dillane and Naomi Wirthner, manages a theater company. Dillane grew up in a creative environment and graduated with a Bachelor of Arts in Acting. He made his acting debut by playing a minor role in Welcome to Sarajevo, at the age of six.

Frank Dillane is a reserved kind of person who hesitates to share his love life openly.  His relationship status is not yet confirmed, whether the actor is romantically involved with anyone.

However, news had it that Dillane is in a relationship with someone inside the industry but no confirming statement has been made so far. It seems Dillane is busy driving his career to the fullest and have no time for a girlfriend thingy.

Needless to say, Frank's reel is much more interesting than his reak life. He portrayed a character of Nick Clark in the series Fear The WalKing Dead opposite Kim Dickens, Alycia Debnam Carey and Jared Abrahamson.

While in the sitcom, he dated Danay Garcia's character Luciana. Dillane's on-screen partner stood by his side till last breathe when Charlie pierced his chest with a bullet.

Frank was romantically linked to a girl, Misha in 2016. The actor was spotted having quality time with her on the beach in August 2016. Harry Potter and the Half Blood Prince star tend to keep his dating history secret as far as possible.

For the very reason, when his fan page on Twitter disclose his photo with a girl on 24 October 2016, Frank tried to skip from the media.

How Much Is Frank Dillane's Net Worth?

The English actor appeared in dozens of hit movies and TV series to this date. In addition to that, he portrayed a Tom Riddle in "Harry Potter and the Half-Blood Prince" which grossed $934 million globally at box office.

has been pocketing massive income through his profession as an actor. His role in the blockbuster fantasy film helped him boost huge payrolls. Since, Frank is skillful and dedicated he definitely makes big bucks from his job.