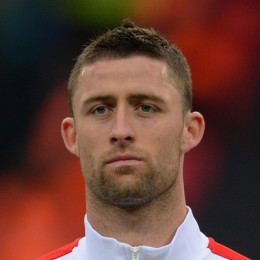 Gary James Cahill is a multi-talented football player who is well known for his technicality and the ability to read the game. Gary debuted in the football arena in the year 2000 with Aston Villa Academy playing for the AFC Dronfield. Currently, he plays for Chelsea FC, the winner of this year's Premier League.

Gary James Cahill was in born in Dronfield on 19 December 1985. His family supported in building his career. Gary's father followed every game and practice of him.

His grandfather was of Irish descent so he could have played for the Republic of Ireland but chose to play for England because he had represented England for under 20 and 21.

Gary debuted in the football arena in the year 2000 with Aston Villa Academy playing for the AFC Dronfield. He started his football career as central midfielder eventually played as a center back.

He then played for Aston Villa and Bolton Wanderers before finally joining Chelsea in 2011.

Till now Cahill has been one of the best defender playing for Chelsea. He has been named in the PFA Team of the Year thrice. Gary in his overall career in the Premier League has scored 44 goals.

He also played for England at the international level. He captained England on 9 October 2015 in UEFA Euro 2016 qualifying in a 2-0 win over Estonia.

Gary Cahill married his longtime love Gemma Acton on June 2013 at Brookfield Manor, Hathersage, Hope Valley. The couple has two children, daughter Freya and a son who was born in January 2012 and named Leo.

A month after tying the knot, Gary said, "I think marriage has been great for me...it will give me an extra motivation for this season" after the training session at the Shah Alam Stadium.

He is living a happily married life with his wife and two children.

As of 2017, Gary Cahill has an estimated net worth of $22 million. Gary transferred to Chelsea for estimated £7million. He was paid £120000 a week playing for Chelsea after 2008 which must have increased by now.

English footballer Gary Cahill married his long time girlfriend Gemma Acton in Brookfield, Heathersage, Hopevalley. The couple have a son and a daughter

Gemma Acton and english footballer had their first child Freya before they tied their knot in June of 2013.

Famous english footballer Gary Cahill and his then girlfriend Gemma Acton had their second child on Jan of 2013, after which the couple finally tied the knot in June of 2013.