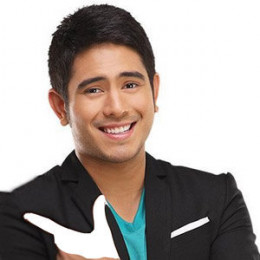 One of the prominent actors, Gerald Anderson has won 10 Best Actor awards and 1 Supporting actor award. His father is an American instructor in the Subic Naval Base while his mother is a Filipina businesswoman from General Santos City, Philippines. Anderson and the other housemates entered the Big Brother house on April 23, 2006. After 42 days, he was named Teen Third Big Placer on the show. He is currently managed and under contract to Star Magic, ABS-CBN's home-based talent agency.

Dashing looking Gerald Anderson has millions of fans with him. He was included in YES! Magazine's 100 Most Beautiful Stars. So he has dated many girls till date. He was dating actress Kim Chiu and they appeared together on several ABS-CBN shows including Love Spell and Aalog-Alog and in the film First Day High. In 2007 Anderson and Chiu starred in their first primetime TV series, Sana Maulit Muli, in September of that year they appeared in their first feature film, I've Fallen For You, produced by Star Cinema.

Gerald was born on March 7, 1989, in Subic Bay, Zambales. He is the son of Gerald Randy Anderson Sr. and Evangeline Opsima. His father is an American instructor in the US Navy who needs to travel back and forth from Zambales to the US while his mother is a businesswoman from General Santos City. Gerald has three siblings, a younger brother, and 2 older sisters.

Gerald Anderson's career started when he was introduced by Joross Gamboa to manager Jhun Reyes and was brought to ABS-CBN to be part of Pinoy Big Brother: Teen Edition Season 1. He was partnered with Kim Chiu and together appeared in several TV shows in ABS-CBN such as Love Spell and Aalog-alog and appeared in the movie First Day High.

Gerald Anderson is not yet married. However, he had multiple affairs in the past, He briefly dated Farina Runkle in 2005. He then got into a longer relationship with Kim Chiu from 2006 to 2010. Gerald moved on swiftly to Bea Alonzo whom he dated in 2010. From 2012 to 2013, he was together with Sarah Geronimo. For the next two years from 2013 to 2015, he dated Maja Salvador.

Gerald has a great passion for basketball. He was once asked; if he didn't pursue an acting career, how would he picture himself at present. He answered; he would have been a basketball player. Gerald personally organized a charity basketball game event for the cause of children with special care. He was motivated by the TV series Budoy that he himself took part in as the lead role.

Gerald Anderson's net worth is estimated to be $2.5 million. His source of income includes his salary and earnings from his career as an actor, brand ambassador, TV producer and basketball player. He owns four vehicles, Ford E150 Customized, Audi R8, Dodge Charger RT, and Maserati Ghibli.