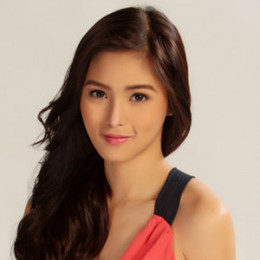 Kim Chiu is a Chinese Filipino actress and model in the Philippines. She has received a PMPC Award for Best Drama Actress, four FAMAS Award nominations and was hailed Princess of Philippine Movies and TV for her accomplishments in the film and television industry. Chiu gained prominence by winning the reality series Pinoy Big Brother: Teen Edition. She starred in 2016 hit Philippine romantic drama, The Story of Us.

Kim Chiu was born in Tacloban City, Leyte on April 19, 1991. She is the 4th of 5 children of her parents who are both Fil-Chinese. Since her parent's separation in 1998, Kim had a dysfunctional relationship with both of her parents.

The names of her 3 older siblings are Lakambini Chui, Twinkle Chui, and William Jr. Chui, while John Paul Jr. is the youngest one. Her family moved from Tacloban City to Gensan, Bohol, and later to Cebu City, where she grew up.

Gaining much recognition for her acting roles, she then starred in the movie I’ve Fallen For You under Star Cinema, and continually appeared in numerous advertisements.

Kim Chiu has an estimated net worth of $5 million. Her source of income includes her salary and earnings from her career as Actress, Model, Television Presenter, Singer, Dancer, Film Actress & Philanthropist. She starred in one of the highest grossing films of all time Bride for Net (2014) which grossed $326 million at the box office.

Chiu dated co-star boyfriend Gerald Anderson from 2006 to 2010. She was then linked to actor and singer Xian Lim, after months of open courtship in 2011. In a 2013 episode of Kris TV, they acknowledged they were "exclusively dating".

Many of the couple's fans and supporters dub their tandem as 'KimXi'. They starred the ABS-CBN primetime melodrama television series The Story of Us.

On 12th April 2018, Xian Lim posted two photos of him together with his rumored girlfriend on Instagram. In the caption, he wrote a heartfelt message for the Kapamilya actress. He said:

'We don’t post or say much about us but I’d like to take this time to dedicate this gram to @chinitaprincess. Super proud of you and what you’ve accomplished.'

In 2013, Kim reconciled with her father "after five years of estrangement" while visiting his second partner and half-siblings in San Jose, Occidental Mindoro. A month later in June, her biological mother fell into a coma. Following a week of hospitalization, she died on June 23, 2013, due to a brain aneurysm.