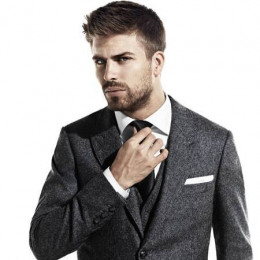 A Spanish professional football player Gerard Pique who plays as defender and center-back for FC Barcelona and the Spain national team squad. He is from Catalan family. He is a son to Joan who works as a businessman, and his mother, Montserrat, is the director of a prestigious spinal injuries hospital which is located in Barcelona. He is the product of Barça's cantera. In 2004 he joined Manchester United and played for the club for 4 years. One of his greatest achievement is that he helped Spain win the FIFA World Cup in 2010. He has won numerous awards for his achievements like La Liga Breakthrough Player of the Year in 2009, La Liga Best Defender in 2010 etc.

Exploring his personal life, this handsome player has not married yet but that doesn't make him single. Currently, he is off the market. He is in a relationship with Colombian singer Shakira since 2011.

Though his partner is 10 years senior to him it has brought no difference in their love for each other. They are already parents of two beautiful sons, Sasha and Milan. Currently there has been no report of any kind of affair of him with anyone which proves that he is very loyal to her.

Gerard Pique Bernabeu was born on 2 February 1987 in Barcelona, Spain.

He is one of the four players winning the UEFA Champions League two years in series with Samuel Eto'o, Marcel Desailly, and Paulo Sousa. Also, he played for his nation in the 2010 FIFA World Cup and UEFA Euro 2012.

He is the first son of the family. He is very cute and gorgeous.

He is the youngest son of the family. His picture along with her can be found in different sites.