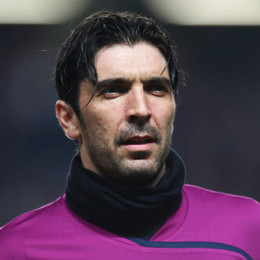 Gianluigi Buffon is an Italian professional goalkeeper who is playing and is the captain of the Italian Serie A club Juventus and in the Italy national football team wearing jersey number 1. He is playing for Juventus since 2001. He has set the record of most appearances for Italy as he started to play from the national team since 1997. He is considered as one of the greatest goalkeepers of all time. He is one of the expensive goalkeeper as well. He is known well for his capability to stop shots.

Buffon is married to Czech model Alena Seredova in June 2011. The couple had been together since 2005 and has two children Louis Thomas (born in 2007) and David Lee (born in 2009).

The couple separated after three years of marriage. After the divorce, he started dating Italian journalist and TV host Ilaria D'Amico. The couple welcomed their first son Leopoldo Mattia on 6 January 2016.

In 2008, he explained in his autobiography that he suffered from bouts of depression during the 2003-04 season. In January 2019, he further revealed that he missed a match for Juventus due to a panic attack.

Gianluigi Buffon was born on 28 January 1978 in Carrara, Tuscany, Italy.

He plays as a goalkeeper playing for French club Paris Saint-Germain.

The two were in relationship since 2005 and has two child from that affair. They were together until three years of their marriage and got divorced. She is a Czech model.

He was also born out of the wed lock of his parents. He is the youngest member in the family. He is very cute and chubby.