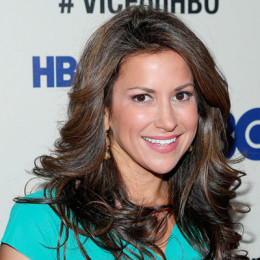 A beautiful television correspondent and anchor from America who has already worked as host and anchor for CBS News, ABC News, and Bloomberg Television. She is also popular for her interview series in Bloomberg TV named "Inspiring Women in Business". She completed her high school from Nightingale-Bamford School where she learned to speak French and Spanish. She earned her master's degree from Columbia University's Graduate School of Journalism. She started her career working as a general assignment news reporter for WWAY-TV-3.

She has not been pulled in any rumors or controversies till date that harms her career. It seems like she is very careful regarding her career. Talking about her personal life, hot and beautiful anchor is already married with her longtime boyfriend. There is no information on her past affairs. She is a mother of a child and living happily and peacefully with her husband, whom she loves very much.

Gigi Stone is living a happy married life with her husband Ian Woods. The pair tied the knot on 16 July 2011.

She has a son with her husband named Weston on 12 July 2012. Stone is quite secretive regarding her personal life and family.

She completed her master's degree in journalism from Columbia University.

She is an award-winning news anchor, national TV host, and producer. She worked as an anchor for ABC News and as a daily correspondent for World News, Nightline and Good Morning America.

At present, she is working as a TV news anchor for national news programs on NBC News and MSNBC. Also, she is a business news expert on various networks.

Apart from her career in journalism, she is one of the board of directors of education non-profit "The Opportunity Network".

After dating couple of years the lovers turned their relationship into marriage. Together they are parents of one child.