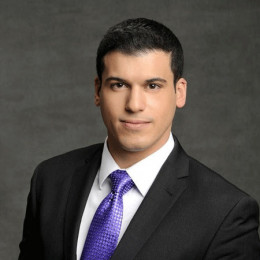 Emmy winner, Gio Benitez is a news correspondent of ABC News. He started his journalism career at the age of 17, with CBS4, WFOR Television. For his work in journalism he has been awarded 2 regional Emmy Awards and is an eight-time nominee. Some of his admirable coverage includes the American mother stuck in a Mexican jail, Boston Marathon bombing, the search for escaped convicts from a New York maximum security prison and many more. His openly gay and married his boyfriend, Tommy DiDario.

Go Benitez was born Giovani Benitez on October 29, 1985, in Miami, Florida, U.S. to Cuban parents. He is American and belongs to the White-American ethnicity. He can fluently speak English and Spanish.

In 2004, he graduated from Miami Coral Park High School. Later he earned his bachelor degree in Anthropology and Sociology from Florida International University.

Gio Benitez started his professional career with WFOR, the CBS owned and operated TV stations in Miami. He worked as an investigative producer and worked on stories involving Medicare fraud, public safety, and government corruption.

Prior WFOR, he worked on the radio, on the nationally syndicated consumer electronics show, Into Tomorrow with Dave Graveline.

In 2009, he shoots whole TV story with an iPhone and known as the first reporter ever did so. He traveled to Haiti in 2010 to cover relief efforts following the devastating earthquake. His return flight to Miami consider a rescue mission because he traveled with injured Haitian evacuees to the island of Curaçao.

In 2012, he covered the  Presidential election and reported extensively on the Trayvon Martin case. Afte a year, Benitez joined ABC News and covered a wide range of stories for the network. He covered the Boston Marathon bombing, f, the American mother stuck in a Mexican jail, the Alabama child held hostage underground in an eight-day standoff and nearly every major snowstorm that swept the nation during the winter of 2013.

He received eight nominations in the Emmy Awards and succeeds to won two of them. Most notably, he was nominated for his investigative series, alleged police brutality which resulted in two Miami officers being forced to turn in their guns and badges.

Gio Benitez is openly gay. He married his longtime boyfriend, Tommy DiDario in Miami, Florida, on April 16, 2016. The duo exchanged a vow at the intimate lavishing ceremony. They were engaged on September 17, 2015.

The duo dated eight months before getting engaged. The couple is happily married now without any divorce rumor.

Previously, he allegedly in a relationship with ABC co-anchor David Muir. Some sources, claimed, David Muir is gay but officially he has not accepted this rumor.  He currently resides in New York with his husband, Tommy.

Gio Benitez’s has an estimated net worth of $4 million. He earns a good sum of salary from the ABC News. According to some source, ABC’s news anchor receives annually $75K. Benitez's co-anchor, David Muir has a net worth of $5 million.