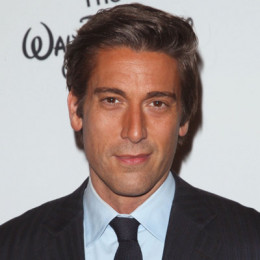 One of the most admired on-screen personality in the US, David Muir currently works as the only weekday anchor of ABC World News Tonight with David Muir, which is one of the most viewed shows of the channel. He joined the show on September 1, 2014. Before the show, he had already enjoyed a number of reputed achievements including Edward R. Murrow Award that was given to him for his work in tracing the path of the hijackers involved on September 1, 2001 attacks. The second son of Ronald Muir and Pat Mills, David is said to be fond of journalism since his early teen. He was born in New York in Syracuse.

No wonder, TMZ calls him “Brad Pitt of News Anchor.” The awesome-looking television personality is praised all over the country for his model-like looks. Thus, emphasizing on his high sex appeal, tall height, charming personality and dedication to journalism, his fans ranging in millions praise him as the best in the industry. Especially, girls go crazy even by hearing his name and the similar reaction he gets from his gay fans. Anyway, he has a kind of zero disclosing policy when it comes to his personal life.

So, excluding the-2005 aroused unverifiable rumor that projected him as an engaged man or everyday arousing gay rumors related to him, it is safe to say he is a single man enjoying his career.

The renowned journalist David Muir was born as David Jason Muir on November 8, 1973. He was raised in a Roman Catholic family along with his one sibling.

He is of white ethnicity and holds American nationality. Mostly he is recognized as the anchor of ABC World News Tonight.

David Muir attended the Institute on Political Journalism at the Fund for American Studies at Georgetown University and also studied at the University of Salamanca in Spain. 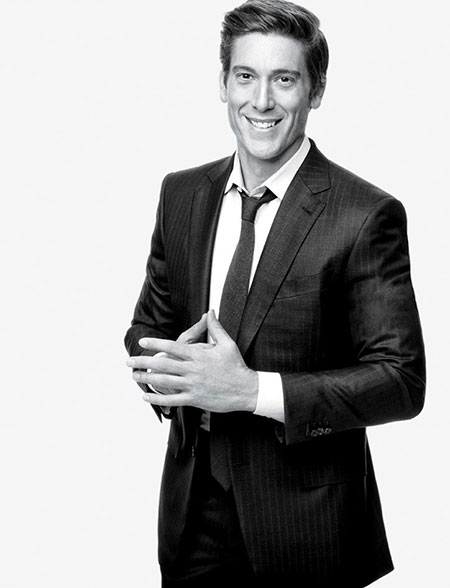 From 2000 to 2003, David Muir worked as an anchor and a reporter for WCVB television in Boston. He won the regional Edward R. Murrow Award for his investigative reporting and the National Headliner Award, as well as Associated Press award for his work of tracing the path of the hijackers involved in the 11th September 2001 attacks.

In August 2003, David Muir worked in ABC News as an anchor of the overnight news program entitled 'World News Now'. In February 2012, he became an anchor for the weekend newscasts as well as the broadcast the news entitled 'World News'. Muir has been silently credited with a rise in the ratings of the weekend evening broadcasts. In March 2013, he was promoted co-anchor 'ABC's 20/20' with Elizabeth Vargas.

Muir has been silently credited with a rise in the ratings of the weekend evening broadcasts. In March 2013, he was promoted co-anchor 'ABC's 20/20' with Elizabeth Vargas.

In November 2012, David Muir worked as  ABC’s lead correspondents for the 2012 U.S. Presidential election. On 13th March  2015, he won an honorary Doctor of Letters degree and the Jessica Savitch Award of Distinction for Excellence in Journalism from Ithaca College.

Here are some interesting facts about the popular ABC host David Muir that you may not know.

In May 2011, Muir urged graduates to use their voices during his speech at Ithaca College in New York. On March 13, 2015, Muir received Jessica Savitch Award of Distinction for Excellence in Journalism from Ithaca College and was honored with a Doctor of Letters degree.

On 8th May  2015, Muir delivered the commencement address at Northeastern University in Massachusetts, as a result, he was given an honorary Doctor of Media degree in this ceremony.

5 feet 11 inches tall David has an attractive face, appealing personality, and has an amazing voice too. Now coming back to the discussion on his love life, Muir was rumored to be gay. Many people speculate about his relationship with Gio Benitez, an American broadcast journalist, and correspondent for ABC News.

The news of David Muir dating with Gio Benitez went viral when the couple was seen holding hand in public and going to gay bars. But when Gio got married to Tommy DiDario on April 16, 2016, the rumor ended forever.

Once he was rumored to be dating Kate Dries, a Deputy Editor at Gizmodo Media Group but publically he never admits his relationship with her.

David Muir is one of the highest-paid news anchors, he has earned $5 million per year. His estimated net worth as of 2017 is $7 million.  His primary source of income is a career as a news anchor and reporter.

Needless to say, David Muir is one of the highest-paid ABC news anchors. He receives a salary of $101,000 to $109,000 per year. He also owned luxurious properties and cars.

Stay updated with marriedwiki.com for more celebrity news and entertainment