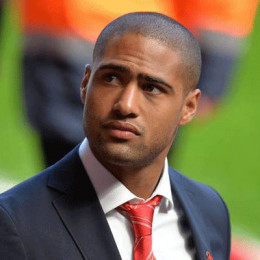 Glen Johnson - born to John Stephens and Wendy Johnson, later took on his mother's surname. He has a older half-sister and a younger brother. They were raised by their mother as a single parent. Johnson's football career was supported by his mother. Being raised by a single parent, Johnson had a tough upbringing and credits his mother for giving him a head start early in life.

Glen Johnson lives in Greenwich, England. He is married to Laura Johnson and the couple have a son and a daughter. There are rumours of Glen Johnson's affairs now and then but the media does not have any hard proof to prove it to be true. He became a member of English National Team in 2003. Glen Johnson was named Man of the match nationwide during 2010 FIFA World Cup.

English footballer Glen Johnson married his long time girlfriend Laura Johnson in the year 2010. The couple have two children together, a son and a daughter.

English star footballer Glen Johnson and his wife Laura Johnson had their second child Leo on 11.1.11.