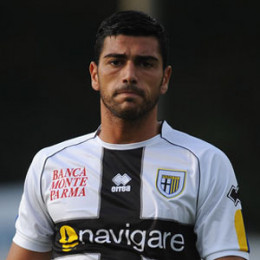 Graziano Pellè is an Italian professional footballer who plays as a striker for Chinese club Shandong Luneng and Italy national team. He grew up in Monteroni di Lecce in the heel of Italy. Pelle could have easily chosen ballroom dancing as his profession after becoming a national under-12s champion with his sister, but he chose his passion over his hobby.

Graziano comes from a dancing family, and it looks like some of the genes are transferred to him as well as he is an excellent ballroom dancer. At the age of 11, he and his sister Fabiana won the Italian Latin American dance championship.

Though he was good at dancing it was only his hobby and Soccer was his passion. Pelle started playing for local club Lecce's youth teams; his father was a striker for Lecce in Serie C.

Pelle was not recognized until a huge break in 2012 when he was loaned out to Feyenoord in the Netherlands, before that he toiled between various Italian clubs and AZ in the Netherlands. However, he won the Eredivisie title while in AZ.

At Feyenoord, he immediately connected with the manager Ronald Koeman, and he scored 11 goals in his first ten games and 29 in 33 for the season leading the club to a third-place finish.

His consistent scoring for Feyenoord earned Pelle a pound 8 million transfer to Southampton in July 2014, In July 2016, after two seasons in the Premier League, Pelle moved to Shandong Luneng for an estimated transfer fee of 12 million pounds and is currently playing for the same.

Pelle represented Italy at under 21 levels. He also played for the nation's Olympic team in 2008 but was not selected for the tournament. He scored on his senior international debut in 2014 and represented the nation at UEFA Euro 2016, where Italy reached the quarter-finals.

After two seasons in the Premier League, he moved to Shandong Luneng for an estimated transfer fee of  £12 million.

Graziano is not married yet but is in a relationship with his beautiful girlfriend, Viktoria Varga. Victoria is a Hungarian Swimmer model. The pair has been dating for four years now.

Graziano reportedly saw her while scrolling through Facebook and later broke the ice with her. Pelle sent 100 roses as an introduction gift to Varga when they first met at the hotel room in Gyor.

The couple is spotted together in the social media. The couple is happy together but it looks like they have no intention to tie the knot very soon.

The lovely pair frequently visits several wonderful places across the globe. You can see that the couple is spending beautiful moments together.

My love , are u confused ? I can see through your eyes

Will they marry anytime soon?

Well, the question is still in everyone's mind. They will definitely update about it in days to come.

One of the highest paid players of Italy Pelle has a jaw-dropping net worth of around $9 million. He signed a contract with Shandong Luneng, a Chinese football club where he is paid £260,000 per week.

Well, he is living a luxurious life and often travels with his girlfriend to various places for holidays. Dubai, Beijing, and Brazil are some of the places the couple has been to.