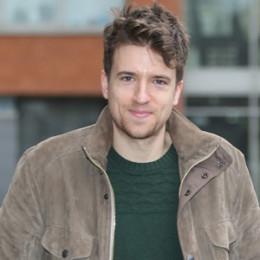 Greg James, 31 is a popular English radio DJ and television presenter. He is recognized for hosting the drivetime show on BBC Radio 1. First broadcasted on Hospital Radio at the age of 14, he presented several shows as the station manager during his time at the University. He won Student Radio Award for Best Male Presenter in 2005.

Born on December 17, 1985, in East Hertfordshire, England, Greg James is the son of  Alan and Rosemary Milward. His birth name is Gregory James Alan Milward. Both of his parents were school teachers. His father was a headteacher whereas his mother was a special needs teacher.

James was raised in Lewisham, South East London along with his sister, Catherine. He completed his graduation from the  Bishop's Stortford High School. He was deputy head boy during his time at high school.

Later, James joined the University of East Anglia in Norwich. There, he studied drama and achieved a 2:1. He was an A grade student, as he gained As in his GCSEs. He hosted several shows during his college days.

Greg began his professional career in June 2007. He joined BBC Radio and ran the  Early Breakfast on Friday. Later, he co-hosts Not Just Cricket on 5 Live. He also hosted a weekly podcast, That's what he said. He hosted the drivetime show on BBC Radio 1. The show helped him to gain public attention.

James made his television debut in 2009. He presented a TV show for BBC Three called Sun, Sex, and Holiday Madness. In 2011, he appeared a non-speaking cameo role in the Doctor Who episode titled Closing Time.

James has appeared in the several TV shows which include  I Survived a Zombie Apocalypse, Murder in Successville, The One Show. In 2017, Greg will co-present the music show, Sounds Like Friday Night in BBC One.

James is active in social work as well. He took part in the Red Nose Day 'Hell and High Water Challenge' and raise over £1 million to build the new school. He also supports breast cancer awareness program.

Greg James is not married at the moment. He was in a romantic relationship with the pop singer, Ellie Goulding. The duo first met in 2010 at Ellie's concert and started dating.

Afterwards, they often spotted together in public events. However, the pressure in their work schedules being the reason for their break up. The duo ended their 18 months relationship in 2012.

Today, they aren't together as a couple but share a good friendship bond and appreciate one another works. Currently, Ellie is dating Caspar Jopling.

James is the godfather to Ruby, the youngest daughter of James Anderson, England cricketer.

James is one of the highest paid BBC Radio 1 DJ with an approximate salary of £150,000-£200,000. He earns a huge fan following for his outstanding commentary.

James has maintained a good net worth in his life. However, he has kept his net worth still covered up, despite earning decent salary.