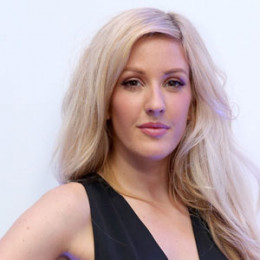 Elle Goulding is an English songwriter and singer, who gained recognition from the song 'Love Me Like You Do'. She is also well known as the second artist to top the BBC's annual Sound of... poll. Apart from her musical career, she breaks headlines due to her romantic link-ups with many big names of showbiz industry too.

Talking about her personal life, Ellie Goulding is currently in a relationship with Team GB Rower's Caspar Jopling.

After her break-up with ex-boyfriend Bobby Rich, who is a Judo Champion and a former bodyguard of Victoria and David Beckham. Casper and Ellie recently took a romantic trip to Italy.

The couple moreover in 2018 got engaged after a surprise proposal. The couple might get married soon but has not mentioned anything yet.

Before Bobby, Ellie had an affair with McFly star Dougie Poynter. The couple dated for two years and separated in 2016. She also dated Greg James but broke up soon.

Burn singer had an intimated affair with English actor, Jeremy Irvine too. They lived in a boyfriend-girlfriend relationship for a year (2012-2013).

During the start of her career, Ellie had anxiety and panic attacks. In 2010 her mental health deteriorated. Hence, she started doing exercise, kickboxing, and boxing as well to control anxiety.

In an interview in 2017, she told me that she still feels nervous while performing but now she can control it.

Ellie Goulding earns a decent sum of money from her successful career as a singer and songwriter. She generates $45,000 -$200 thousand for singing.

She has also won the Brit Awards twice, Harper's Bazaar Women of the Year Awards, Jimmie Awards and was even nominated for the Grammy's.

Goulding is also done endorsements for brands like John Lewis, Marks & Spencer and Pantene. Currently, her estimated net worth is $10 million.

Ellie's career began in the year 2009 July, with her debut single 'Under the Sheets.' The single reached number fifty-three on the UK Singles Chart followed by a successful appearance on Later... with Jools Holland, and then joined Little Boots on a UK tour.

Later in March 2010, Goulding released her debut album, Lights, which reached number one on UK Albums Chart and number six on the Irish Albums Chart.

She also toured in support of Light and supported Passion Pit in March 2010 and John Mayer during his British tour in 2010. She performed at a number of festivals during the summertime.

After that, she released several hit songs, including a soundtrack for 'The Hunger Games,' and her singles, that was under the top 5 in UK Chart.

Her third studio album titled Delirium released on 6 November 2015. She released one of her highest rated songs 'Love Me Like You Do' which featured as soundtrack in the hit novel based movie 'Fifty Shades of Grey.'

Ellie Goulding took a break from music and made a comeback performing at the opening of the 16th edition of the Mawazine Festival. At the festival, she sang her recent single 'First Time' featuring Kygo, which released on 28 April 2017.

Ellie Goulding was born as Elena Jane Goulding on 30th December 1986, in Hereford and grew up in Lyonshall in a small village near Kington, Herefordshire. She is the second of four children (two sisters and a brother).

Goulding was born to father Arthur Goulding, who came from a family of undertakers and mother, Tracy, who previously worked at a supermarket.

Her parents got separated when she was five years, later stayed with her stepfather, who was previously a lorry driver. She always considered her stepfather as 'horrible.'

At her early age of 9, she started playing the clarinet, and at age 14, Ellie began learning guitar. She studied Lady Hawkins' High School. She played the character of the Scarecrow in a school production of The Wizard of Oz.

When Goulding was studying at Hereford Sixth Form College, she entered a singing competition, also became the winner. After beginning politics and drama, and English courses at the University of Kent, she was introduced to electronic music.

Caspar Jopling who is an art dealer and the son of Conservative politician, Michael Jopling is the husband of Ellie Goulding.