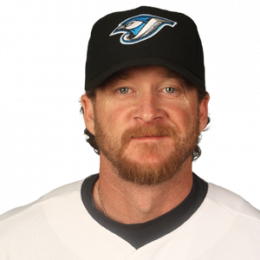 Gregg Zaun, a former American professional baseball player currently works as a baseball analyst and a public speaker. Starting his baseball career in 1995, he has played as a catcher for almost sixteen seasons in Major League Baseball until 2010. Zaun won the World Series Championship in 1997 with the Florida Marlins. He has also served as an on-air personality with Canada's No. 1 sports network Sportsnet from 2006-2017. He is a married man and is a proud father of a daughter.

Gregg Zaun was born Gregory Owen Zaun on 14th April 1971 in Glendale, California. His birth sign is Aries. He is American as per his nationality and as far as his ethnicity is concerned, he is White.

Zaun's parents raised him along with his sister, Stephanie Zaun. He is the nephew of Rick Dempsey who is a former MLB catcher.

Zaun completed his schooling at Saint Francis High School in La Canada, California. He was a high school teammate of a former baseball player, Mark Loretta. He completed his graduation in 1989.

Gregg Zaun started his baseball career in 1989. He was drafted by the Baltimore Orioles in the 17th round of 1989 MLB draft. He successfully reached the majors with the Orioles in June 1995.

Zaun played as a back-up for the team in his early career and was traded to Florida Marlins in 1996. He won a World Series Championship with the Marlins in 1997. He moved to the Texas Rangers prior to the 1999 season.

He played for almost sixteen seasons in Major League Baseball in his career with the following teams:

Zaun signed a one-year contract worth $1.9 million on December 4, 2009. He suffered a severe injury in the 2010 season. Following his injury, his MLB career ended on May 20.

In January 2011, Zaun signed a minor league contract with San Diego Padres with spring training invitation. He chose to retire on March 7, 2011, due to his previous injury.

Gregg Zaun began his broadcasting career in 2006 before retiring from the game. After the retirement, he worked on Sportsnet with Jamie Campbell.

In March 2011, Zaun signed a two-year contract with Rogers Sports as an MLB analyst. He also worked as a part-time analyst for Sportsnet Radio Fan 590 and the Blue Jays Radio Network. The same year, he also worked as a color commentator for Red Sox against Blue Jays.

As of 2017, Rogers Communications kicked him out from Sportsnet after receiving several allegations against him for inappropriate behavior in the workplace.

Gregg Zaun, the former baseball player is a married man. He tied the knot with his longtime girlfriend, Michelle Zaun in the Bahamas. The ceremony was cozy yet lavish where only limited of guests were present including families, close friends, and relatives.

The couple shares a daughter together. They are living happily with no news regarding their divorce or extramarital affairs.

Gregg Zaun was a part of  Mitchell Report following a 20-month-long investigation in which former Senator George Mitchell was accused of using performance-enhancing drugs. In a report, Kirk Radomski claimed that he sold the drug to Zaun after a referral from Jason Grimsley.

In addition, claims were made that Radomski produced a cheque from Zaun for $500, but Zaun denied the allegations.

Later, Zaun passed a statement defending himself that the cheque was not to buy performance-enhancing drugs. He responded in detail to the allegations made in the report after issuing a denial as soon as it came out.

Zaun denied that he took performance-enhancing drugs and stated that he owed Grimsley $500 and Grimsley re-wrote the cheque to purchase drugs for himself.

In 2015, Zaun revealed that Cal Ripken and other players of Baltimore Orioles assaulted him physically; pushed ice down his pants wrote rookie on his forehead and forced him to miss his practices. After the revelation, Zaun passed a Tweet saying sorry,

‘’ sorry if you were offended but hierarchy and pecking order are important in any industry. No one ended up on the D.L. Boys being boys.’’

In the first week of December 2017, Zaun was fired from the Sportsnet. He was fired for his improper behavior and inappropriate comments towards the female employees of the network. As per the Rogers Communication, he physically harassed many female members of the network and as a result, was kicked out.

The president of the Rogers Communication, Rick Brace passed a statement regarding Zaun,

‘’ This week, we received complaints from multiple female employees at Sportsnet regarding inappropriate behavior by Gregg Zaun in the workplace," the statement said. "After investigating the matter, we decided to terminate his contract, effective immediately. This type of behavior completely contradicts our standards and our core values. We believe in a professional workplace where all employees feel comfortable and respected. We are grateful to our employees who spoke with us and we will take every measure to protect their privacy.’’

In the response to the allegations, Gregg Zaun issued an apology.

Gregg Zaun, 46, has the height of 5 feet 10 inches (1.78m). According to Networthpost, the former baseball has an estimated net worth of $11 million.

Zaun earned a tremendous amount of salary from his baseball career which includes:

Gregg Zaun also owns a house in Florida worth $595k.