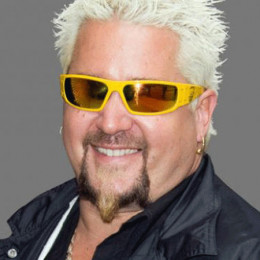 Guy Ramsay Ferry nicknamed "Guido" is a television personality, game host, author and restaurateur, best known for his television series on the Food Network. He is the co-owner of five restaurants in California. He is the son of Lewis James Ferry and Penny Anne. In 1990, he graduated with a Bachelor of Science in Hotel Management from the University of Nevada, Las Vegas.

Guy Fieri was born as Guy Ramsay Ferry on January 22, 1968, in Columbus, Ohio, U.S. He is the son of Penelope Anne (Prince) and Lewis James Ferry. He holds an American nationality and belongs to the white ethnicity.

He holds an American nationality and belongs to the white ethnicity. Fieri was raised in Ferndale in rural Humboldt County, California along with his younger sister, Morgan Ferry.

During his high school, he was a foreign exchange student to France which influenced him to pursue his career in food and cooking.

Guy along with his father built a special pretzel cart at the age of 10 and eventually earned enough money to fund his trip to France to study cuisine. He used to work at the Red Lion Inn in California.Later, he attends the University of Nevada, Las Vegas and earned his graduation with a Bachelor of Science in Hotel Management in 1990.

Later, he attends the University of Nevada, Las Vegas and earned his graduation with a Bachelor of Science in Hotel Management in 1990.

Just after his graduation, Fieri joined Stouffer's as a Manager for a Long Beach, California restaurant a and later became a district manager for Louise's Trattoria.

In 1996, Fieri opened his first restaurant Johnny Garlic's, a "California Pasta Grill" in Santa Rosa, California with his business partner Steve Gruber. Later, they open three more locations in Windsor in 1999 and in Petaluma in 2000 in Roseville in late 2008.

In 2012, Guy opened his first New York City restaurant, Guy's American Kitchen, and Bar which became "the most scathing review in the history of the New York Times", and "likely the most widely read restaurant review ever".

After being crowned the Next Food Network Star, in 2006, Fieri launched his first television series, Guy's Big Bite which aim is to offering viewers lots of bold flavors.

On the show, Fieri travels the country in search of tasty, unpretentious eats. Subsequently, he took on a more traditional-style cooking show format with Guy Off the Hook in 2008, in which he cooked in front of a live audience.

He launched the first chain oc chicken tender restaurants earlier in Summer and he recently announced in February 2019 that he's opening Chicken Guyis in Miami's Aventura Mall in late spring.

Fieri is a married man, he exchanged a vow with Lori Fieri in 1995. He shared with two sons; Hunter Fieri and Ryder Fieri with his now wife. Just after his marriage, he changed his surname from Fieri to Ferry, to honor his late paternal grandfather as he is of Italian descent.

Spent the day hangin’ with the fam in Jamaica! @carnival #ChooseFun

Currently, Fieri lives in Santa Rosa, California along with his wife Lori and their two sons. The duo is together for a long time and there aren't any kinds of rumors regarding their divorce or split.

Fieri and his wife has been married for 22 years and it was just like love at first sight. He made the best attempt to win her love.

"That was a long time ago. I don't remember what I made, but I do remember it was quite an epic time. The first time I cooked for her, she was just like, 'You made all this?' We both love food, so being able to cook, that was one of the things that impressed her."

He has a good relationship with his sons and the family of four is living a blissful family life.

Guy earned a decent amount of net worth from his career as he succeeds to earned net worth of $50 million. Despite this, he owned many luxurious restaurants in the USA and Europe.

She is the first and current wife of Fieri, whose personal details are unknown. The couple is blessed with 3 sons.

He is the first child of Mr and Mrs. Fieri, who was born safe.

He is the second son who was born safe and healthy.

He is the youngest member in the house, who was born healthy.