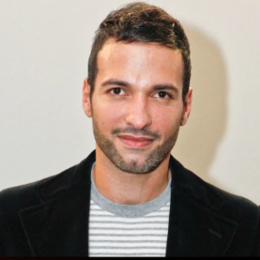 Haaz Sleiman is an Emirati-born Lebanese actor best known for portraying his roles in The Visitor. Similarly, the 45-year-old earned some prestigious awards for his supporting role in the TV series Killing Jesus.

Who is Haaz Sleiman Dating? Actor is Gay

Haaz Sleiman is not yet married, so he does not have a wife. In fact, Sleiman is openly gay and currently in a relationship with a same-sex partner. Undoubtedly, fans are eager to know about Sleiman's relationship with his partner. However, Haaz prefers to keep his love life under the radar.

The Nurse Jackie cast, regardless of playing Muslim gay character Mohammed Mo-Mo De La Cruz, claimed he was straight. Haaz kept his sexuality low profile until he came out in 2017.

Haaz came out to the world as gay on August 23, 2017. The actor being gay, realized the need to show his support for the people of the LGBTQ community. Sleiman raised his voice when the hate-related homicides of homosexual people surged in 2017.

Before coming out, Sleiman shared a screenshot to Facebook and Instagram of a 2009 Advocate interview, in which he stated he was straight and also had a girlfriend in New York. He wrote, "My body started shaking, I was froze, shocked. And then I lied saying I was straight".

Haaz Sleiman has summoned an estimated net worth of $4 million as of 2021. Sleiman indeed built a huge fortune from decade long career as a TV and film actor. Marver superhero makes thousands of dollars per movie, which is enough for livelihood.

Haaz Sleiman made a breakthrough role as Tarek in the award-winning film The Visitor. After winning Independent Spirit Award for The Visitor, he starred in Nurse Jackie, Covert Affairs, Killing Jesus, Veronica Mars, and American East. Following that, Haaz performed on the New York stage in the widely popular show Food and Fadwa.