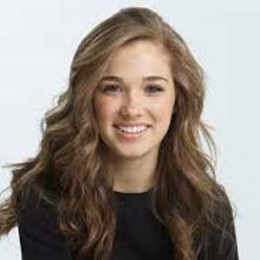 An American actress, Haley Lu Richardson made her onscreen debut in 2012 as Cameron in the short film Meanamorphosis. She worked as a leading dancer in the Cannedy Dance Company in Phoenix from 2001 to 2011. She founded Hooked by Haley Lu in 2009, a line of crocheted clothing and accessories that she designs and creates.

Haley Lu Richardson was born on 7th March 1995 in Phoenix, Arizona, USA. She grew up in Arizona as the only child of Valerie M. Richardson (Valiquette), a graphic designer, and Forrest L. Richardson, a golf course architect.

In 2013, Haley Lu Richardson did a recurring role as Tess in the ABC Family series Ravenswood.

She joined a concise list of actors who have ever appeared in lead roles in two full-length features to screen at the LA Film Festival. The two movies are The Well and The Young Kieslowski. Seth Caplan produced both the films.

Besides that, she played a recurring role as Tess Hamilton on the supernatural teen drama series Ravenswood (2013-2014). Also portrayed Krista in the 2016 coming-of-age film 'The Edge of Seventeen.'

Haley Lu Richardson is dating Brett Dier, an actor. The girlfriend and boyfriend started seeing each other since February 2015. Their relationship became public when Brett spoke about her in a post on 7th November 2013.

In April 2016, Brett met with a car accident which broke his three ribs and pelvis. Haley took care of him during that period.

The relationship between the power couple still exists which can be seen in their Instagram post and if it continues this way they may even get married. The pair was also seen walking the red carpet at the 2017 MTV Movie & TV Awards held at the Shrine Auditorium.

In her glittering career, Haley Lu Richardson has earned name and fame in the movie industry. Although there is no exact figure about her earning, her present net worth should be around a million dollars.