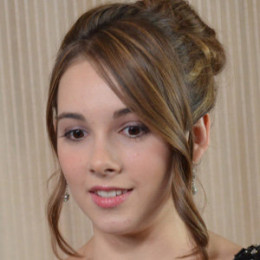 An American actress, Haley Pullos is currently single. She is widely known for her role as Molly Lansing-Davis in the American daytime soap opera “General Hospital”. Haley Pullos has two brothers and two sisters. She has appeared minor roles on TV shows such as Dollhouse, and Til Death. Haley Pullos Nominated for a Daytime Emmy Award as Outstanding Youngest Actress in a Drama Series in the year 2015.

She also won Young Artist Award for Best Performance in a Daytime TV series - Young Actress in 2012. Haley Pullos also won two Young Artist Awards for her role on General Hospital in 2014. Haley Pullos appears in the ad "Little Tricks" for Yoplai. She played the younger version of Jennifer Love Hewitt's character on the series "Ghost Whisperer". Haley Pullos has not disclosed any personal information on social sites. She's rumored to be dating actor Jimmy Deshler.