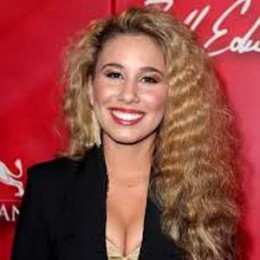 Haley is an American singer, songwriter and voice actress from Wheeling, Illinois. She was born unto a family of musicians that did cover songs of the famous Rock songs from the 60s and 70s. Haley first rose to prominence after placing third in the tenth season of American Idol in the year 2011. Her zodiac sign is Virgo. Reinhart comes from German, Irish and Italian descent, American by nationality and belongs to white ethnicity

Haley was born to parents Patti Miller-Reinhart and Harry Reinhart, both of them musician and native Chicago from the north side and south side respectively. Haley has one sister, Angela, who is five years younger than her.

Angela is a songwriter and musician and primarily performs indie folk music. Haley started singing at the age of 8 and played guitar at home with her mother. Ever since middle school, Reinhart had planned on auditioning for American Idol. She even received an award at the end of the year for student “Most Likely to Be on American Idol.”

Haley attended the local Mark Twain Elementary School and later transferred to O.W Homes Middle School. She graduated from Wheeling High School in 2009. Reinhart then joined Harper College in Illinois where she studied jazz music and was associated with the Jazz Ensemble and the Jazz Lab.
Hailey also fronted a band during college under names as Haley’s Comet and Reinhart & the Rastatutes. The bands used to cover classic rock songs from Led Zeppelin and other famous artists of the time. She served as a lifeguard for four years prior to auditioning for American Idol at the Family Aquatic Center, a waterpark at the Wheeling Park District,

Reinhart first auditioned for the ninth season of American Idol but didn’t advance to the Hollywood round. However, she returned for the tenth season and was selected by judges to be a semi-finalist after her Hollywood solo performance and later advanced into Top 12 finalists.

Sadly she was eliminated and became behind Scotty McCreery and Lauren Alaina. Haley was often criticised for her choice of song but was a fan favourite and a dark horse of the competition. She is only the contestant from season 10 of American Idol who has over one million views on six of her YouTube performances video. Reinhart was praised as “one of the more convincing rocker-chick to grace the Idol stage,” and has appeared twice on Billboard’s list of “American Idol’s Top 100 Live Performance”.

Reinhart after American Idol signed a recording deal with Interscope Records in July 2011. Haley released her debut album Listen Up! on May 22, 2012, and became first Ameican Idol alumni to perform at Lollapalooza. After a change in management company in 2012, Reinhart expanded the agreement with her music publisher, Ole, in 2012. Haley then signed with ICM Partners in March 2016 in addition to her ongoing deals with Ole.

In 2015 Haley covered Elvis Presley’s song “Can't Help Falling in Love’ for commercial of Extra Gum which became a viral sensation and helped in her recognization.

Reinhart won Cannes Lion for Entertainment and a Clop Award for her song in 2016. Haley released her second album, Better, on April 29. 2016 which debuted at number 22 on Billboards' Independent Albums chart. Reinhart has begun production on her third studio album which is slated to be released in 2017 and its lead single “Baby It’s You’ was released on June 16, 2017.

Haley made her voice debut on December 18, 2015, as Billy Murphy in the Netflix animated comedy F for Family and played the role of the main cast in both first and second season.

Talking about Haley’s personal life, she seems to be a reserved person as she has not shared details about her affairs and dating life in any social site or any social media. To this point, it is unknown if she is single or dating anyone.

However, there were rumours about Haley and Stefano Langone being in a relationship which was confirmed true. While two kept quiet about their romance, their fellow season 10 contestant on American Idol. James Durbin, outed them as an item when talking to KBFX in Bakersfield, California recently.

Haley and Stefano dating rumour emerged in August 2011. The two got romantically involved while the Top 13 contestants started rehearsing for the Idol Tour.

A few months before, Haley found herself romantically linked to Casey Abrams. They were working together on Casey's new album as well as they both worked together for Elvis Song Cover of “Can't help falling in love.”But Casey cleared the doubt of the fans as he stated that they were just good musical friends.

Well, till now Haley has not been married. It is assumed that Stefano is her boyfriend but until the pair decides to make their relationship public nothing can be guaranteed about her relationship status.

Haley Reinhart net worth in 2014-15 was $2,000,000. She also gets paid by sponsorship, ads, endorsement, featuring and so on. There is no detail on her present net worth but looking at her current success it must have surely increased.