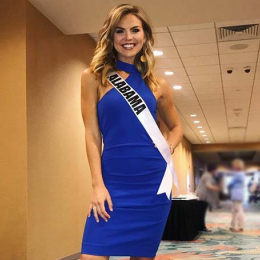 Hannah Brown is an American model who is famous for stunning physic and modeling skills. The 24-year-old model is also popular for appearing in the television show named The Bachelor. Brown was crowned as the Miss Alabama USA 2018 while representing West Alabama.

Personal Life of Hannah Brown; Is she Dating Someone?

Hannah Brown is possibly single as of now. The well-known model is not spotted with any men outside of the reel world. Moreover, she seems focused on her career or maybe she already has tested the bitter taste of the relationships?

Famous American model Hannah Brown during one of her photoshoots.

Hannah is out of rumors and controversies regarding dating life, however, she is spotted with many men in her Instagram account. Here take a look at the post she shared with Brendon Hall;

Hannah was spotted with Brendall in many places and it looked like both of them were dating secretly from the world.

You May Like; The Bachelorette's New Lead Hannah Brown Reveals The Qualities of Her Future Husband

Hannah is an active person in social media and loves to share posts regarding her personal life in her Instagram account. Additionally, she is a fun loving person and prefers to go on vacations whenever it is possible.

What is the Net Worth of Hannah Brown? Also, know about her Career

Hannah Brown holds an estimated net worth of $2 million. She grabbed that fortune by working as a professional model and actress in many projects. In addition, the average salary of a model is $49,200 per year.

Brown is an active person on social media and uses Instagram from time to time. The stunning model often posts pictures regarding her personal life and professional life. Moreover, she earns over $2,699.25-$4,498.75 per post from her Instagram account.

The Miss Alabama USA also appeared as a contestant in the season 23 of television show named The Bachelor starring with Colton Underwood. Brown placed seventh in the competition, after getting eliminated by Underwood during the episode broadcasted on February 18, 2019. Later, she was announced as the lead for the fifteenth season of The Bachelorette by the host Chris Harrison.