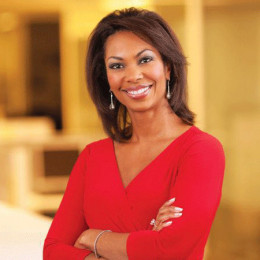 Harris Kimberly Faulkner is a news reporter and host for Fox News Channel. She is the anchor of Fox Report. She is the daughter of Ret. Lt. Col. Bob Harris, a United States Army aviator. She earned a B.A. in mass communications from the University of California, Santa Barbara. She has won six Emmy Awards including the Best News Special and 2005 Emmy for Best Newscaster.

Her personal life is pretty simple and sweet. She has been in a marital relationship with her husband for more than decades. The couple is blessed with two adorable daughters with whom they currently live in New Jersey at Edge water. There is no sign of their divorce, as they both seem happy and satisfied with each other.

Harris Faulkner was born as Harris Kimberly Faulkner on 13 October 1965 at Fort McPherson in Atlanta, Georgia. Her nationality is American and ethnicity wise she is an African-American.

Her father, Bob Harris was a retired Lieutenant Colonel and Army Aviator. During her early days, she lived in different places including Stuttgart and Germany.

Harris completed her graduation from the University of California, Santa Barbara in mass communications.

Faulkner began her career with LA Weekly where she served as a freelance business writer. She involved on television with an internship at KCOP-TV. From 1992 to 2000, she worked for Kansas City's WDAF-TV as an evening anchor. While in Kansas City, she was the victim of harassment by a former acquaintance.

Later, she joined KSTP-TV in Minneapolis–Saint Paul and even she was a correspondent for the 2005 revival of A Current Affair.

Harris was awarded six Emmy's for her outstanding performance including 2005 Emmy for Best Newscaster and Best News Special.

Harris Faulkner joined Fox News Channel in 2005 as a correspondent and is based in New York. She has also filled in for Shephard Smith as a substitute anchor. Harris appeared as a guest panelist on Red Eye w/ Greg Gutfeld along with Greg Gutfeld.

Since, April 2014, Faulkner began working as one of the co-hosts on the daytime Fox News show named Outnumbered.

Faulkner is a married woman, she exchanged vow with Tony Berlin, a former WCCO-TV reporter in 2006. Their wedding was believed to be an intimate family affair. The duo shared two children; Bella Berlin and Danika Berlin.

The duo is together for a long time and there aren't any rumors regarding their divorce or splits. In 2015, she sued a toy manufacturer company for selling the plastic toy named Harris and even she demanded $5 million for settlement.

Harris has earned an impressive net worth from her career as she succeeded to earned $4 million net worth till 2017.

Check out the 5 interesting facts about Harris Faulkner,

He is the first and current husband of Faulkner, who is tall and handsome. The couple has two beautiful daughters from their marriage.

She is the first child of Faulkner and her husband, who was born healthy.

She was born safe and sound. Her images can be viewed on the internet.