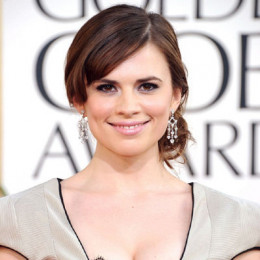 Hayley Elizabeth Atwell is a British actress known for her work in films like The Duchess, The Pillars of the Earth, Cassandra's Dream. She earned a Laurence Olivier Award nomination after appearing in "A View from the Bridge".

Hayley Atwell is possibly single at the moment and not dating anyone. She, however, has a long list of unsuccessful relationship. She first dated, her high school friend, Gabriel Bisset-Smith.

In 2012, Atwell shares a romantic affair with a musician, Paul Wilson. Then she dated the actor, Stephen Merchant in 2013.

The actress also has a love affair with Evan Jones in 2014 but shortly after the duo breaks up.

Hayley Atwell holds an estimated net worth of $4 million. The main source of her earning is her appearances in the movies and TV series.

Hayley Atwell was born as Hayley Elizabeth Atwell on 5 April 1982 in London, England. She is the daughter of father, Grant Atwell, a massage therapist and photographer and mother, Allison, a motivational speaker. She studied at the Guildhall School of Music and Drama since 2002-2005.