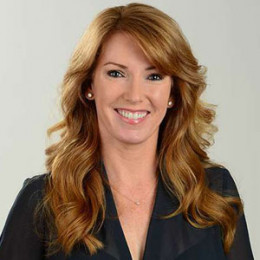 Born and raised in Jonesville, North Carolina, United States, Heather Cox is a well known American sportscaster for NBC. Cox is also known as the former volleyball player who played at the University of the Pacific. She also won "USA Volleyball E. Douglas Boyden Media Recognition Award" in 2004 being part of the high school volleyball team.

Cox has been working as a sportscaster for NBC since 2003. She made her Olympics debut reporting from volleyball and beach volleyball in the Athens Olympic 2004.

Heather Cox was born on 3rd June 1970. Her mother's name is Alyson Schoeny. She is of White ethnicity and holds American nationality.

During her days at the University of the Pacific, Cox participated in women's volleyball team, who played as a team captain. She was also ranked in the top five national players from 1988-1991.

The team reached the Final Four, also became the national championship runner-up in 1990. In 1992, she graduated from the University of the Pacific with a degree in communications. From 1987-1995, Heather Cox served as a member of the United States National Volleyball Team.

She played professional volleyball match in the National Volleyball Association as the captain of the Sacramento Stars.

So fun to have my old world and new world collide. Great to see ya ol' ??friends @KirkHerbstreit @MartySmithESPN #ThePlayers

Heather Cox started her broadcasting career as a basketball analyst for Fox Sports Net in 1993, she also covered college football. She has also served as a columnist for the Pac-10 Conference. Cox also served as a reporter on Running with the Pac magazine show from 1999-2000.

Moreover, she has worked for CBS Sports, reporting on the men's motocross, auto racing, and NCCA basketball tournament.

During 2016 Summer Paralympics in Rio de Janeiro, Brazil, she worked as a side reporter for American Paralympic broadcaster NBCSCN. At present, she is serving as a sideline reporter for Thursday Night Football on NBC, and NFL Network, for postseason games on NBC for the Golf Channel.

Heather Cox is married to Bill Cox for a long time. The couple shares two children, a son and daughter, Will Cox and Allyson Cox. Since their marriage, there is no any sign of them getting separated, as the pair is living a happy life together.

Heather Cox along with her family lives a good quality life in Boise, Idaho.

Heather Cox earns a decent amount of money from her career as a reporter. As of 2018, Cox's total net worth is estimated $10 million. An average salary of a sports reporter $43,640 annually.

With a good amount of net worth, Heather Cox is living a luxury life along with her family.

Heather Cox and Bill Cox married in 2017, and share two children together. There is no any sign of them getting divorced.

Will Cox is the first child of the couple.

Allyson Cox is the second child of the couple.