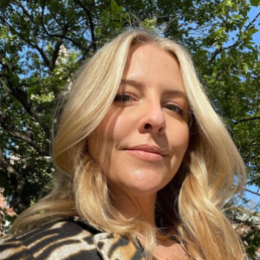 Heléne Yorke is a Canadian actress, singer, dancer, and writer. She is best known for her role in Graves, High Maintenance, and The Other Two. Heléne has been in the entertainment field for the past sixteen years. Most recently, she played Brooke Dubek on the HB o series The Other Two.

Yorke is a married woman. She happily tied a knot with her partner Bary Dunn on September 3, 2021, in Brooklyn, New York. And after several years of dating,  the Graves alum announced a wedding almost six months after their engagement.

Mr. Dunn proposed to his lady love with a giant diamond ring on Valentine's day. Heléne wrote, "got engaged to the hottest guy I've ever met" that Valentine's Day. 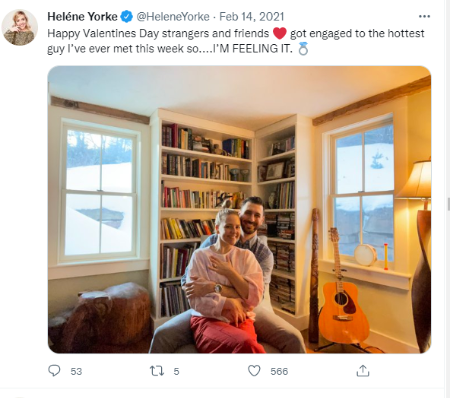 Heléne Yorke got engaged to Bary in 2021. SOURCE: Twitter

Moreover, for the wedding, the actress was stunned in an elegant off-the-shoulder mermaid dress with a plunging mesh neckline and glittery mesh for her veil and sleeves.

At the same time, Mr. Dunn added vibrancy to his black bowtie, a classic white button-down, and black pants with a green suit jacket for Brooklyn chic urban affair" at the Green Building Venue.

In December, the alum revived her mom's gown from her 1982 wedding with the help of celebrity costume designer Sam Bennet.

On January 22, 2022, Yorke revealed her pregnancy with her first child. In an Instagram post of herself, The Other Two cast flaunted her baby bump wearing an off-white sports bra and matching bike shorts. 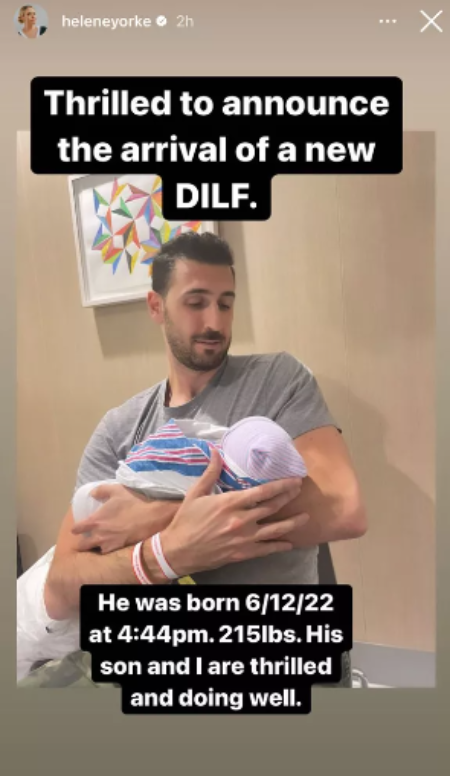 On June 12, 2022, Helene Yorke gave birth to a baby (the couple's first child) with husband Bary Dunn. The Hollywood icon shared the happy news on Instagram and pictures of Bary with their young one in the hospital.

Before marrying Mr. Dunn, Yorke was in a romantic relationship with Bobby Flay. They started dating in 2016 before the pair went separate ways in 2019, citing personal issues. Yorke met Mr. Flay for the first time at a Knicks basketball game, and the lovebirds immediately hit it off. 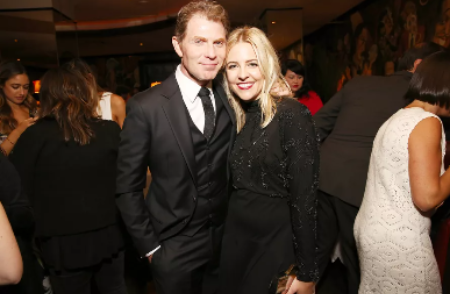 Mr. Bobby Flay is a New York-born American actor who has produced and performed in several movies and tv series. He is immensely popular for Bobby Flay's Barbecue Addiction, Entourage, and Boy Meets Grill with Bobby Flay. Besides Helene Yorke, Bobby has had a love affair with Stephanie March, Kate Connelly, and Debra Ponzek.

Heléne Yorke possesses an estimated net worth of $2 million as of 2022. Her primary source of income is a successful career as an actress. Yorke has earned fame for herself working on Broadway, Wicked and American Psycho. 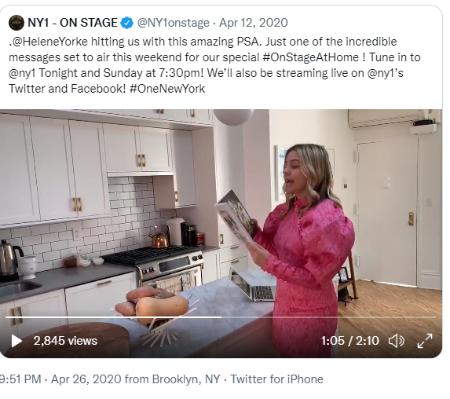 Yorke started her career as an actress in theatre. In 2007, the starlet made her Broadway debut in the stage play Walmartopia at Minetta Lane Theatre. Moreover, Yorke portrayed the character of Flaemmchen in Grand Hotel. After the play's success, Yorke went on the U.S. tour for High School Music.  What's more?

Heléne Yorke's most recent project includes the short movie, Supermarket. In the show, the starlet portrays the character of Eve. As of now, Helene is busy in the shoot post-production.

Currently, she portrays Brook Dubek on the HBO Max series The Other Two. Besides, She has appeared as Jane Martin in the American showtime period drama Masters of sex. Her other notable acting credit includes Olivia Graves on Graves ad Amy Breslin on The Good Fight.

Heléne earned media attention from television series such as Louie, Wiener & Wiener, American dad!, and Robot Chicken. Besides, fans critically acclaim Helene for her role as Brooke in the 2019 series The Other Two. The Canadian beauty receives a payroll of $19,000 to $208k per annum.

Heléne Yorke was one of the third children of Rgos Dyke and Andrea Dyke. She is thirty-seven years old. Heléne's father is the president of Zione Solutions, LLC, whereas her mother, Andrea, owns A Della Dress. Yorke traveled with her father to cities like Atlanta, Los Angeles, and Minneapolis.

Yorke moved to the United States as a year-old child with her parents. She grew up in Pacific Palisades, California. A few years later, Helena began dancing ballet at age three. She took her first acting class in a reputed middle school in the United States. And finally, Heléne passed with a Bachelor of Fine Arts from the University of Michigan.

Heléne Yorke has appealing physical stats with a height of 5 feet 6 inches. She weighs 50 kg (110 lbs). Her hourglass-shaped body is measured in 32-29-35 inches. She often wears white, grey, blue, black, and printed outfits.

Yorke wears a dress size of 4 U.S. Heléne has long blonde hair and brown eyes. The actress takes a balanced diet and does gym and yoga to stay fit. The skillful Canadian actress looks young and pretty even after being a mother.

Heléne Yorke, the Brooklyn-based actress, joined Twitter in August 2010. Today, she has amassed 11.1k followers. Yorke prefers to stay in touch with her well-wishers on social media.

The Other Two alum has 46k followers on Instagram under the username "heleneyorke." She makes $237 - $395 per ad post. Helene's Instagram bio suggests her name is pronounced as "huh-Lay-nuh."

Bary Dunn and Helene Yorke are happily married for a year. They got engaged six months prior and lived a sound life.