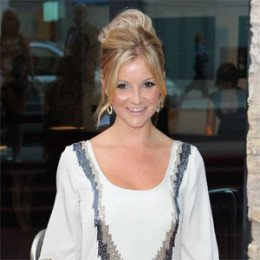 Helen Skelton, age 34, is a popular English TV presenter as well as an actress. She is widely recognized as the former co-host of BBC children's programme 'Blue Peter' where she served from 2008 to 2013.

Helen Elizabeth Skelton was born on 19 July 1983, in Carlisle, Cumbria, England. She is British and belongs to White/Caucasian ethnicity/race. She was raised along with her brother, Gavin on a Dairy farm in the village of Kirkby Thore. Her brother is a professional footballer as well as a  player-manager.

Skelton attended the Kirkby Throne Primary School and then joined Appleby Grammar School. She graduated from the Cumbria Institute of the Arts with a degree in journalism. She worked on Coronation Street and Cutting It during her college days.

Skelton is a qualified tap dance teacher, and once she said, if she weren't a broadcaster she would have become a dance teacher.

Helen Skelton started her career in public relations, and later shifted to journalism. During the initial phase of career, she worked in the newsroom at CFM radio followed by several other networks. In 2005, she joined BBC Radio Cumbria.

In 2008, she was introduced as the 33rd presenter for Blue Peter. After her departure from Blue Peter, she joined BT Sports channel as a presenter of live FA Women's Super League football matches.

Since 2008, Skelton occasionally presented the segments of Countryfile and also presented the Holiday Hit Squad (2013), London Marathon Highlights (2014). Apart from that, she hosted TV shows like; Tonight: Kids V Career, 2016 Summer Olympics,  Lorraine and many more.

In 2017, she hosted the swimming coverage on the BBC during the World Aquatics Championships 2017. She also co-presented the two episodes of Walks with My Dog on More4.

Skelton published her first novel, Amy Wild: Amazon Summer in 2015. She is actively involved in marathons and racing too. In 2009, she became the second woman to finish the 78-mile (126 km) Namibian ultra marathon and just after weeks, she completed the 2009 London Marathon.

She participated in many challenges like; Kayaking the Amazon, Tightrope walking, and the South Pole.

The pair is blessed with a baby boy, Ernie, born on June 19, 2015. In 2016, Skelton announced her pregnancy and welcomed her second son, Louis (born on April 2017). After her husband joined the Catalans Dragons club, Skelton and family shifted to France in September 2015.

Helen Skelton's has succeeded to earn an impressive sum of net worth from her journalism career, her net worth is estimated to be around $6 million, as per online sources. Generally, the salary of TV presenters in the United States is more than $50,000 per year.

Skelton's husband, Richie Myler, has also earned a good amount of net worth from his sports career. He hasn't revealed the exact figure, but it is assumed to be in millions of dollars.

Ernie Myler is the first son of Richie Myler and Helen Skelton. He was born in 2015.

Louis Myler is the second and youngest son of Skelton. He has an elder brother, Ernie.