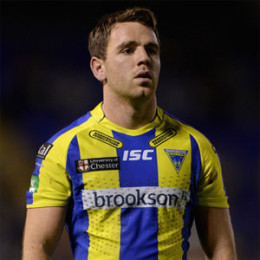 English Rugby league footballer, Richie Myler is currently playing for Leeds Rhinos in Super League. He played scrum-half in Super League for teams like Salford City Reds and Warrington Wolves. Myler has won the National League One title with Salford, he is also the winner of 2008 Co-Operative Player of the Year award. Myler is married to TV presenter, Helen Skelton and has fathered two sons with her.

Richie David Myler was born on May 21, 1990, in Widnes, England. As per his nationality, Myler is an American and as far as his ethnicity is concerned he is White. His birth sign is Gemini. Myler completed his schooling in Widnes.

Richie Myler started his professional rugby career in 2007 with the Widnes Vikings. The following year, he signed a three-year contract with Salford and helped his team win the National League One title scoring 25 tries out of 32 appearances.

He was honored with Co-Operative Player of the Year award in 2008. In February 2009, Myler made his Super League debut. The same year he signed a four-year contract with Warrington. He played for the team till 2015.

In 2015, Myler confirmed he signed a two-year deal with Catalans Dragons, seeking new challenges. On June 27, 2017, he signed a three-year contract to join Leeds Rhinos starting from the following season.

Besides that, he also represented both the Lancashire and England U17s at Academy Level. In 2009, Myler represented his country against France.

Richie Myler, 27, is married to Helen Skelton, an English TV presenter. The pair tied the knot in 2013 at Kirkby Thore's St Michael in Skelton's childhood village Penrith. Their wedding was a big affair, attended by many faces from sports and journalism field.

Myler and Skelton first met in 2012 and got engaged the same year of March. The duo now parents two children. They welcomed their first child, Erin Myler in 2015. A year later, his wife, Helen Skelton announced her pregnancy and the pair welcomed their second son, Louis Myler in April 2017.

In 2015, Myler along with his family shifted to France after he joined the Catalans Dragons club. He moved back to England after signing a contract with Leeds Rhinos.

Myler prefers to spend his free time with his family and loves to visit different places with them.

In 2009, Richie Myler signed a four-year contract with Warrington worth £275,000  becoming the most expensive teenage player in Rugby League history. During the period, he was also offered a contract from Widnes which allegedly would have made him the highest paid player, but he refused the contract in favor of his four-year deal with Warrington.

His wife, Helen Skelton's net worth is estimated to be $6 million and gets a salary of around $50,000 per year which is the basic salary of TV presenters in the United States.

Helen Skelton is a popular English TV presenter as well as an actress. She is the former host of BBC children's programme 'Blue Peter'.

Ernie Myler is the first son of Richie Myler and Helen Skelton. He was born in 2015.

Louis Myler is the second and youngest son of Skelton. He has an elder brother, Ernie.