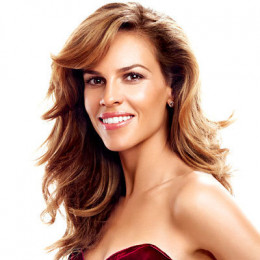 Hilary Swank is an American actress and producer who is best known for her acting in the famous "Jungle Book "series as a child artist and in several of the movies like Million Dollar Baby, Insomnia, etc. She is a winner of two Academy Awards for Best Actress and is a receiver of a star on the Hollywood Walk of Fame in 2007. She has been active in the profession since 1990 till date.

Hilary Swank is currently in a relationship. She was previously been married and has been divorced.

She married actor Chad Lowe on 28 September 1997 and the divorce was finalized on 1 November 2007.

Premiere of I Am Mother last night at the Sundance Film Festival! Was another great time here in this fun town with such loyal film lovers. #IAmMother

After that, she dated her agent John Campisi for a few years and ended in May 2012. She has no children till date. There are rumors that she is pregnant. This rumor seems false. Previously as well, she was rumored to be pregnant.

She married entrepreneur Philip Schneider on 18 August 2018 after two years of romance. She celebrated Valentine's Day 2019 with her newly wedded husband and posted a beautiful image of their marriage. Have a look:

Some of her famous movies include The Gift, Boys Don't Cry, Insomnia, The Core, Red Dust, and The Reaping.

He is an actor. The met together while filming Quiet Days in Hollywood.. After dating for a while, they got married to each other. They have no any children.