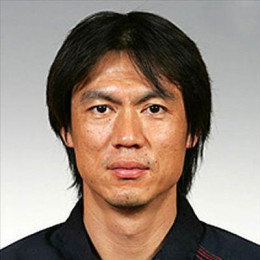 Hong Myung-Bo was born in Seoul. He has two other siblings. He graduated from Korea University in 1991. He debuted his football career through Pohang Steelers in 1992. He is one of most recognized sports personality in Asia. He retired from his football career in the year 2004 and started working as the head coach for the South Korean National Team and resigned himself after 2014 FIFA World Cup, due to the team's poor performance under his leadership.

Hong Myung-Bo married in 1997 to his wife Cho Soo-Mi who is 5 years younger to him. The couple has two sons together. His eldest son Hong Seong-Min (1996) and youngest son Hong Jeong-Min (2000). One of his sons attends the Korea International School.

His sons were involved in a philanthropic event with Hong Myung-Bo when he was appointed as UNAIDS International goodwill ambassador. Seongmin presented the executive director of Thailand's UNAIDS with $3000 donation raised through his art exhibit for AIDS.

Details about his net worth and salary is still under the radar.

He is considered as one of the greatest Asian footballers of all time alongside compatriot Cha Bum-Kun. He became the head coach of South Korean national football team leading the team in the 2014 FIFA World Cup.

Asian football legend Hong Myung-Bo married his wife Cho Soo-Mi who is 5 years younger to him. Together the couple have two sons, eldest Hong Seong-Mi and youngest Hong Jeong-Mi.

Eldest son of Hong Myung-Mi and Cho Soo-Mi raised USD 3000 and donated it to Thailand's UNAIDS through his art exhibit of AIDS in the year 2012.