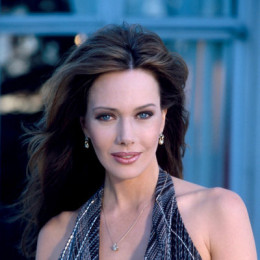 Hunter Tylo is an American actress, former model and author best known for her role on The Bold and the Beautiful as Dr.Taylor Hayes. In 1985, from “All My Children” she stepped in the filmy world. She is the daughter of Morris Jabez Hunter and Jo Anne. She has been named one of People Magazine's 50 "Most Beautiful People" twice. She is a christian by religion.

All My Children star Hunter Tylo's personal life is a bit tragic. She is not involved in any kind of romantic affair as of now. Neither, she is spotted with any men on PDA. The blonde beauty rarely shares anything on her socials that makes people tough to get hint of her love life. She is probably waiting for her Mr. Perfect.

The Fort Worth born actress was married three times in her life. Firstly, she tied a knot with her boyfriend Tom Morehart in 1980. They share a son, Christopher Morehart. They divorced in 1984.

After that, she weds actor Michael Tylo in 1987. Also, with second husband Tylo she was blessed with two daughters Izabella Gabrielle and Katya Ariel Tylo; a son Michael Edward "Mickey" Tylo. Michael Tylo Jr. died by drowning in the home pool.

Even her marriage with third spouse Gersson Archilla was short-lived. The 1.68 m tall actress hitched Gersson Archila on 29 November 2009. Midst the process of divorce, she was rumored of being in a relationship with several g. They called it quits on 30 August 2018.

Hunter Tylo's net worth is estimated to be $13 million as of 2019. She receives a salary of $100 thousand per hour for appearing in TV series and movies.

Tylo is highly acclaimed for portraying Dr. Taylor Haynes on the soap opera The Bold and the Beautiful's 2000 episodes. Some of the movies she's worked include Final Cut, Down, and Derby; Longshot, etc.

Similarly, her TV credits include Burke's Drama, Diagnosis Murder, The Nanny, She Spies, Queens of Drama, Baywatch and All My Children. She starred in Days of Our Lives opposite Arianne Zucker and Camila Banus.

Deborah Jo Hunter was born on 3 July 1962 in Fort Worth, Texas to Morris Jabez Hunter and Jo Anne. She is of Cherokee Native American descent from her maternal side. Tylo has a younger brother, Cliff. Hunter always dreamt of performing on screen from an early age. Thus, she began her acting career in 1984.

He was the first lucky man to get such a beautiful wife but due to some reason it didn't last long. The couple have a son together.

He is an American actor best known for his portrayal of Quinton Chamberlain on Guiding Light. The couple together have three kids among which son died by drowning in the pool.

He is a tall handsome guy who is very positive towards his wife and her children. The couple married in a secret ceremony in Las Vegas, Nevada.

She gave birth to her first child Chris at the age of seventeen. He was born safe and healthy.

She gave birth to her second child at the age of twenty-five. He sadly died by drowning in the pool.

She gave birth to her third child at the age of thirty-four. She was born safe and sound.

She was born safe but was diagnosed with a rare cancer of the eye called retinoblastoma which was cured later.