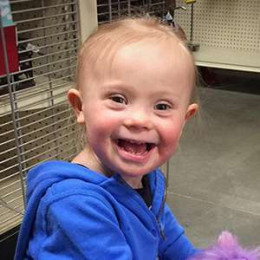 Indiana Feek is the daughter of an American country music singer and songwriter, Rory Lee Feek and mother country music singer and songwriter, Joey Marie Martin Feek. Her father Rory began playing guitar at age fifteen. He established Giantslayer Records to launch new independent artists. Indiana's parents comprised the duo Joey + Rory. Her mother Joey was diagnosed with cervical cancer and died on March 4, 2016. Indiana was born with Down syndrome but after surgery and treatment, she was declared cancer free.

She was born with Down Syndrome. Her mother Joey died of metastatic cervical cancer on 4 March 2016.

You May Like: "Once You Choose Hope, Anything's Possible", Meet Jane McLelland, A Woman Who Battled Her Cervical Cancer In an Unusual Way

Indiana has two elder sisters from her father’s previous marriage named, Heidi Feek, who was born in 1986 and Hopie Feek, born in the year of 1988. Hopie is a lesbian.