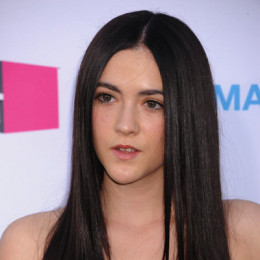 Isabelle Fuhrman started her acting career at the early age of 7. She is famous for her role as Gretchen Dennis in the TV series Ghost Whisperer for which she won a nomination for Young Artist Award. She is also known for her role as Clove in the film The Hunger Games.

Isabelle Fuhrman is an American actress born on February 25, 1997, in Washington, D.C, U.S. She grew up in Atlanta, Georgia along with her older sister Madeline Fuhrman. Her father is Nick Fuhrman., a former political candidate, and business consultant and mother, Elina Fuhrman, a journalist.

She attended Buckley School, which is an exclusive private school in Sherman Oaks. She also studied at Royal Academy of Dramatic Art(RADA) and The Westminster Schools. She graduated from Stanford UniversityOnline High School in 2015.

The 20 years old actress Furhman acting career started at the age of 7 when she was seen by a casting director from Cartoon Network when she was waiting for her older sister and cast her in one of the shows, Cartoon Fridays.

Furman made big screen debut on 2007, in the drama Hounddog. The same year she was picked to be cast in the movie Orphan alongside Vera Farmiga and Petar Sarsgaard.

She then appeared in the TV series Ghost Whisperer, which starred Jennifer Love Hewitt. She played the role of Gretchen Dennis, and her performance earned the nomination of Young Artist Award.

In 2011, she starred in the dark comedy Salvation Boulevard as the role of Angie Vanderveer, which premiered at the Sundance Film Festival.

Isabelle Fuhrman is only 20 years and still to get married. But, she was involved in a dating rumor with Colin Ford, an American actor and voice actor.

Later, it was rumored that her boyfriend was Alexander Ludwig, a Canadian actor, singer, and model. However, both of them didn't address the news.

It looks like the young actress likes to keep her affairs away from media.

As of 2017, the American actress Isabelle Fuhrman net worth is estimated to be around $500 thousand.