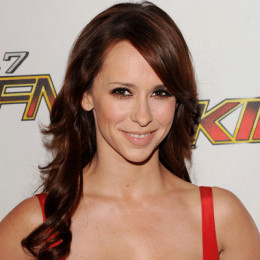 Jennifer Love Hewitt is an American actress and singer-songwriter. She’s also a producer, author, and television director. Hewitt's outstanding work as an actress and director for TV series “Ghost Whisperer” won her Saturn Award as Best Actress. She's directed three episodes of Ghost Whisperer and The Client List too.

They got married on 20 November 2013 just five days before she gave birth to her first daughter Autumn, born in November 2013. The "I Know what You Did Last Summer" star and her husband are blessed with two children now.

Happy Valentine’s Day to my forever valentine and love.

The cupid who announced the pregnancy in June hitched quietly with just the two of them present. In June 2015, they welcomed a second child, Atticus James Hallisay.

The Waco, Texas-born actress had an intimate relationship with Rip Pardue, an American actor, and model from May 2003 to October 2003. Even though, this pair's affair was short-lived they were the talk of the town.

The Munchie star has dated and been engaged to actor Ross McCall in 2007. However, their lovey-dovey relationship lasted only for a year. They end up citing personal issues.

Jennifer Love Hewitt, a 40-year-old actress has an estimated net worth of $18 million. She played the role of an actress in a number of movies and TV series from where she is earning a massive amount.

As per some sources, 5 feet 2 inches tall beauty makes an average salary of $380k from her appearance in the TV series, 9-1-1. Similarly, she also earns a salary of $25k from her role in Criminal Minds.

Besides, Jennifer owns a house in California worth $3.25 million. She bought the house in 2013. As of late 2019, the family of four lives a sound life in Pallisades, Los Angeles, California without any signs of disputes.

Jennifer was born on 21st February 1979 in Waco, Texas to Patricia Mae and  Herbert Daniel Hewitt. Her mother is a speech-language pathologist and father is a medical technician.

The American pop singer grew up in Nolanville in Central Texas and has good kinship ties in parts of Arkansas. Jennifer and her elder brother was raised by their mother after their parents divorced. She studied at Lincoln High School.

As a little girl, Hewitt was attracted to music that led her to step into the entertainment industry. Additionally, at age three she sang "The Greatest Love of all" during a livestock show. At 9, she toured the Soviet Union with the Texas Show Team.

Brian and Hewitt met on the set of the series Love Bites. Their relationship started in early March of 2012 and got married on 2013.

Autumn is the first daughter of Hewitt and Brian. She was born just 5 days after the wedding of her parents on 26th November 2013.