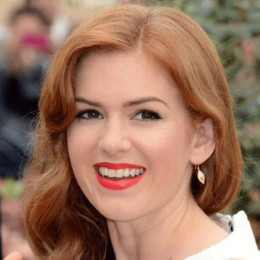 Isla Lang Fisher was born to Scottish parents Elspeth Reid and Brian Fisher. She briefly spent her childhood in her parents' hometown in Scotland but was raised in Perth, Australia along with her four brothers. She started her career through Australian TV commercials when she was 9 years old and later went on to play roles in children's television shows such and Bay city and Paradise Beach.

She went through three years of studying Judaism and her Hebrew name is Ayala, which means doe. She also has stated to keep her Shabbat as well. They have three children together, two daughters Olive (2007) and Elula (2011) and a son named Montgomery (2015).

Isla Lang Fisher was born on 3 February 1976 in Muscat, Oman.

She gained wide popularity playing the role of Shannon Reed on the soap opera Home and Away (1994-1997).

Isla Lang Fisher met her husband Sacha Baron Cohen at a party in Sydney, Australia in 2002. Sacha Baron Cohen is British-Jewish comedian, model, actor and a writer. The couple were engaged in the year 2004. Isla converted to Judaism in order to get her husband's family's approval. Isla stated, "Religion comes second to love as far as we are concerned." She underwent 3 years of study and also have a Hebrew name Ayala, meaning Doe in 2007. The couple finally got married in 2010 Paris, France.

Famous comedian and actor couple Isla Lang Fisher and Sacha Baron Cohen had their second child on August of 2010.