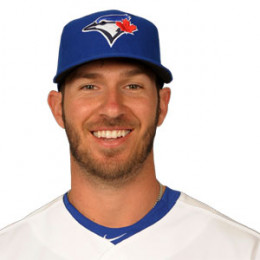 Jonathan Paul Arencibia, better known as J. P. Arencibia, is a Cuban-American former baseball catcher. He played in Major League Baseball (MLB) for the Toronto Blue Jays, Tampa Bay Rays and Texas Rangers from 2010 to 2015. He is happily married to his wife, an American singer, Kimberly Perry, since 2014 and currently, the pair resides in Nashville, Tennessee.

J. P. Arencibia was born on 5th January 1986 in Miami, Florida, United States. He attended Westminster Christian high school where he used to play football and basketball and most played baseball, as he was good at it. Arencibia played the Under-18 Florida Bombers along with future leaguers Gaby Sanchez, Yonder Alonso, Mat Latos and Jon Jay.

Later, he joined the University of Tennessee and started playing for the team Tennessee Volunteers. There he won the USA Baseball Richard W. Dick Case Player of the Year Awards, in 2006.

In 2007, Blue Jays decided to keep him as a catcher rather than convert his position as first base. During the college time, he played with Chase Headley, Luke Hochevar, and Julia Borbon. Also, in summer of 2006, he played baseball in Cuba with David Price.

Arencibia began his international career after he was drafted 21st by the Toronto Blue Jays in 2007 Major League Baseball draft. Soon, he was assigned to Toronto's Low A ball affiliate, the Auburn Doubledays of the New York-Penn League. In 2008, he began the season with the Dunedin Blue Jays of the Florida State League.

In the Florida State League (FSL) all-star break, he led the league and finished the first half of the season batting .315 with 13 homers, 22 double and 62 RBI. Also, he was named as the starting catcher for the Eastern Division in the FSL All-Star Game.

After the game, he was promoted to Blue Jays’ Double-A Team, the New Hampshire Fisher Cats of the Eastern League. During the period, he took part in the Arizona Fall League as a member of the Phoenix Desert Dogs. And in 2009 season, he was promoted to the Los Vegas 51s, the Blue Jays’ Triple-A affiliate in the Pacific Coast League.

On 4 August 2010, he made it to the major leagues replacing the injured John Buck with a right thumb laceration. During the period, J.P was batting .303 with a PCL leading 31 home runs and 79 RBI.

He started playing as a catcher at the Blue Jays 2011 home opener where he hit the team’s first home run of the season, a 2-run homer to deep center and finished the night with 2 home runs and a triple. Also, he broke up Justin Verlander’s best game where he walked after a 12 pitch at-bat and led all major league catchers in passed balls in 2011, with 12.

In Opening Day 2012, he hit a game-winning 3-run home run in the 16th inning against the Cleveland Indians which was the longest game in Opening Day history in terms of innings. That year, he reached 100 RBI for his career in the 4-1 win against the New York Yankees.

On 25th July 2012, he was hit on the right hand by a pitch while catching in a match against Oakland Athletics. The X-rays showed a positive for a fracture, costing him to miss six weeks.

He then began a rehab assignment with the Class-A Dunedin Blue Jays and finished the seasons with a .233 batting average, 18 home runs and 56vRBI. The following year, he had signed a one-year contract worth $1.8 million with Texas Rangers till the completion of a physical examination. There he optioned to the Triple-A Round Rock Express and outrighted to Round Rock.

In the match against New York Yankees, he dominated the rival team pitching with four extra base-hits in five at bats and batted in seven of eleven Rangers sun but unfortunately, the Rangers fell 12-11. Not only this, Rangers lost the game against Tampa Bay Rays with 10-1 on 13th August 2014. Then on October 9, he declined the assignment to Round Rock as a free agent.

Later, the Philadelphia Phillies announced that Arencibia had been signed to a minor league contract with an invitation to spring training on 20th May 2016. During the period, he hit .167 with one home run and two RBI in 12 games for the Triple-A Lehigh Valley IronPigs.

He announced his retirement from professional baseball on 18th January 2017.

Arencibia is married to Kimberly Perry, since 2014. The couple first met in February 2012 and started dating.

The pair got engaged on 30th September 2013 and married on 12th July 2014. As per the sources, Arencibia proposed her with 3.3-carat ring after the event in a reception held at Perry’s parent’s home.

Their wedding ceremony was held at Greenville, Tennessee with a star-studded guest list. In the grand wedding ceremony, Carrie Underwood, Black Shelton, and Miranda Lambert.

Currently, the husband and wife are living in Nashville, Tennessee. As the couple is well established, they soon may expand their family welcoming a new member.

Arencibia had agreed to a one-year contract worth $1.8 million with Texas Rangers and has made several contracts with the different clubs. Altogether, he along with his wife has an estimated net worth $3.6 million.

J.P. Arencibia is married to Kimberly Marie Perry since 2014. Kimberly Marie Perry is an American singer better known as a lead singer and guitarist of The Band Perry. Some of her popular songs include If I Die Young and All Your Life which was nominated for Grammy Awards.