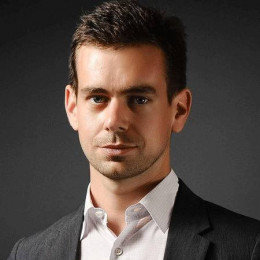 He is a founder and CEO of Square, a mobile payments company and co-founder of Twitter. In 2012, he was awarded with "Innovator of the Year Award" for technology by the Wall Street Journal. He studied at the Missouri University of Science and Technology but later transferred to New York University. His mother was a homemaker and father was a employee at mass spectrometers developing company.

Moving on to his personal life, he is yet unmarried. He does not have any children as well. As he is a good looking and talented guy lots of girls want to be his life partner, but these days he is in a relationship with New York's yoga instructor. Before this relationship, he dated a gorgeous supermodel. There is no any controversy regarding his professional and personal life. He has managed to keep his good image in front of the public.

Jack Dorsey was born on November 19, 1976, in St. Louis to Marcia (Smith) and Tim Dorsey. He is widely known as a co-founder and CEO of Twitter.

He was raised in a Catholic family and has a part Italian descent. Her father worked in mass spectrometers manufacturing company and his mother was a homemaker.

Dorsey attends the Bishop DuBourg High School, a Catholic high school and later he went to Missouri University of Science and Technology before transferring to the New York University Tandon School of Engineering.

However, he was dropped out from university to pursue his career goals.

Jack started her career as a programmer and in 2000  he moved to Oakland in search of better career option. He started a company to dispatch taxis, couriers and emergency services using his dispatch software.

Dorsey joined the Twitter as the CEO which was launched in 2006. The social networking service became extremely popular within months and as of May 2015, Twitter has more than 500 million users and more than 25 offices around the world.

In may 2010, Jack developed a small business platform to accept debit and credit card payments on a mobile device called Square. It was used in  iPhone, iPad, iPod Touch, or Android devices via the headphone jack, and as a mini card reader allows a person to swipe their card

It was used in iPhone, iPad, iPod Touch, or Android devices via the headphone jack, and as a mini card reader allows a person to swipe their card.

Jack is in an on-and-off relationship with Kate Greer. However, he hasn't married yet and consider his business, Twitter, and Square like his children.

He is one of the richest young men and succeeded to earn 1.88 billion dollars from his career.