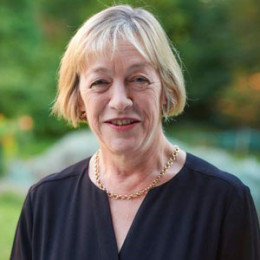 Jacqueline Ashley, better known as Jackie Ashley, is a British journalist and broadcaster. She has worked for different channels including Channel 4, ITN, New Statesman, BBC, The Guardian and so on. She is happily married to a journalist, Andrew Marr and is blessed with three children.

Jackie Ashley was born on 10th September 1954, in St. Pancras, London, England. She is a daughter of Jack Ashley, a former Labor Party politician and Kay Ashley.

She attended Rosebery Grammar School for Girls, a grammar school located in Epsom, Surrey. Later, she studied Philosophy, Politics and Economics from St. Anne’s College, University of Oxford. She is also a member of the Oxford University Broadcasting Society.

After completing the degree from University, she worked as a trainee with the BBC from 1979-81. She also worked as a producer and news reader on Newsnight, a weekday BBC Television current affairs program from 1981-84.

From 1984-86, she worked for Channel 4 as a reporter and producer on TV-am, a TV company that broadcast the ITV franchise for breakfast television in the United Kingdom. Then, she moved to ITN in the year 1986 as a political correspondence.

Then her television career starts as a journalist and a political editor from New Statesman from 2000-2002. And the following year, she became a columnist and political interviewer for the British Daily Newspaper, The Guardian.

She mainly specialized in the Labor Party, the media, politics, public services, trade unions and women’s issues. She is a supporter of Gordon Brown’s government.Moreover, she becomes a President of Lucy Cavendish College, Cambridge in the year 2015.

Jackie is married to Andrew Marr, a Scottish Political commentator, and television presenter. The couple exchanged vows in 1987 and is blessed with a son, Harry Marr and two daughters, Isabel Marr and Emily Marr.

The husband and wife first met in the year 1986 when Marr was appointed for the Independent and Jackie worked with ITN. Currently, the family of five resides in Primrose Hill, North London.

Jackie is one of the successful female journalists who has spent more than 30 years in the field of Journalism. Looking at her lavish lifestyle, she probably has an estimated net worth of more than seven figures.

Jackie Ashley married Andrew Marr in August 1987 in Surrey. Andrew is a Scottish political commentator and television presenter. The husband-wife first met in the year 1986. They are blessed with one son and two daughters.

Harry Marr is one only son of Jackie Ashley and Andrew Marr.

Isabella is the second children of Jackie Ashley and Andrew Marr.

Emily Marr is the second daughter of Jackie Ashley and Andrew Marr.