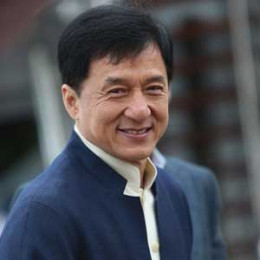 Chan Kong Sang, better known as Jackie Chan is a famous Hong Kong martial artist, actor, stuntman, film producer, and singer. His acrobatic fighting style with an improvised weapon and innovative stunts makes him one of the versatile actors in movies industry. Jackie has performed in more than 150 films in his lifetime. Among which his successful hit movies include “Rush Hour,” “The Forbidden Kingdom,” “Around the World in 80 Days” along with Jet Li, Chris Tucker, Cecile De France.

Jackie Chan and Joan Lin tied a knot on 1st December 1982. When they first met, Lin was much more famous than Chan. The same year the couple welcomed their first child Jaycee Chan, who is now an actor and a singer.  He recalled,

"During her pregnancy, I was working the whole time and didn't go to the States until she was going to deliver. A form needed to be filled in before the baby was born. She then asked me if she could fill in my name under the 'father' column; ... my agent said we should get married first."

"One day she told me she was pregnant. I said I wanted the baby... Although I looked calm, I didn't know what to do."

He nearly got divorced with his wife because of his extra-marital affairs with Elaine Ng Yi-Lei. Their relationship also led to the birth of a child, a daughter named Ella Ng Chok Lam on 18 January 1999. However, Elaine chose to raise the child on her own.

Currently, Chan is a faculty member of the school of Hotel and Tourism Management at the Hong Kong Polytechnic University. He is also associated with different organizations including UNICEF/UNAIDS. He also donated a huge sum of money to orphan children and other social causes.

He discussed his struggles, dreams, and vulnerabilities in his autobiography "Jackie Chan: Never Grow Up, Only Get Older" published in April 2015. He said in the book that he's seen so many beautiful girls that he's numb to them.

"I actually was very popular among girls ever since I was young. After I became a stuntman, I would go to nightclubs with my senior fellow apprentice."

"After becoming rich and famous in the 20s, "girls would come to me like butterflies. Actually, I've been numb after so many years. I have seen too many beautiful girls, Chinese or foreign. Now I don't think anyone is particularly beautiful."

Apart from his personal life, he admitted that he is obsessed with cleanliness and has a mild obsessive-compulsive disorder.

Jackie began his career at the age of five. Later at the age of 8, he made his appearance in the movie Big and Little Wong Tin Bar in 1962 but made a breakthrough from the movie Snake in the Eagle's Shadow which released in 1987.

Some of his big hits were Project A Part 2 and Police Story 2 which won him the award for best action choreography at the Hong Kong Film Awards 1989. It was also followed by Armour of God2: Operation Conder, the Police Story3: Supercop for which Chan won the best award at Golden Horse Film Festival.

His first huge blockbuster success came when he co-starred with Chris Tucker in 1998 in Rush Hour. This film made him a Hollywood star. He then wrote his autobiography in production with Jeff Yang entitled I am Jackie Chan.

As of 2017, Jackie's net worth is estimated to be around $370 million as per Celebrity net worth and $395 million as per the Richest. He got a lavish bungalow named Hills Villa costing around $3 million. Back in 2016, he was the second-highest-paid actor in the world.

Happy to be at Sundance

He is also passionate about cars and has got Bentley Mulsanne and Sabru Impereza Evo in his collection. He has also got own private jet Legacy 650 which cost around $30 million.

He is also listed as one of the highest-paid actors in the Hollywood industry. Chan's wealth doesn't just come from films he is also involved in the Johnny Knoxville starring skip trace. He also the owner of #brand that include branded merchandise, a cinema chain with his name on it.

Jackie Chan was born on 7th April 1954, to Charles and Lily. He was raised in Hong Kong along with his sibling brother Fang Shide and sister Guillen.

Chan studied at the Nah-Hwa Primary school on Hong Kong Island. In 1960, he was sent to the China Drama Academy a Peking Opera school. In 1976, he moved to Canberra and attended Dickson College and also worked as a construction worker. Jackie is also a part of the Seven Little Fortunes.

Chan received honorary Doctor of Social Science degree in 1996 from the Hong Kong Baptist University. He also received an honorary doctorate from the University of Cambodia.

Jacky Chan married Joan Lin, a Taiwanese actress on 1st December 1982. The couple met in 1981 and got married in the following year. The same their first child Jaycee Chan now a singer and actor was born. The couple nearly got divorced due to an extra-marital affair of Chan but somehow, they are still together.

Jackie Chan and Joan Lin welcomed their first child, a daughter, Jaycee Chan in the same year of their marriage in 1982. Jaycee is a singer and actor by profession.