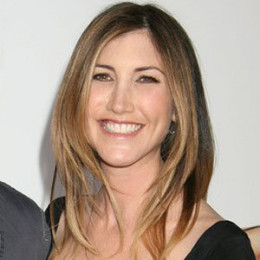 An American former model as well as actress and music department , Jackie Sandler is currently married to actor, comedian, screenwriter as well as film producer, and musician, Adam Sandler. The couple married on 22nd June 2003. Jackie was raised by her father . VH1: All Access: Celebrity Weddings is her popular TV episode. Her popular movies are Little Nicky, Eight Crazy Nights (2002) and so on.

Jackie Sandler was born Jacqueline Samantha Titone on September 24, 1974, in Coral Springs, Florida, the USA to Lila Titone and Joseph Titone. She is American and is of Italian descent. She was raised a Christian.

Sandler parents had divorced in the 90s which were lasted for almost 7 years because of which, she remains estranged from her father. She went to local high school in Coral Springs.

Jackie Sandler began her career as a model and has featured in several national and international modeling advertisement. She made her acting debut in 1999 with Rob Schneider directorial venture, Deuce Bigalow: Male Gigolo where she played the role of Sally.

The success of her movie provides her more chance in Hollywood. Then she appeared in the movie, Big Daddy as a waitress. Some of her screen credit includes Little Nicky (2000),  Eight Crazy Nights (2002), Duplex (2003), 50 First Dates (2004). She also featured in the TV episode,  VH1: All Access: Celebrity Weddings.

Jackie Sandler is happily married to Adam Sandler. The duo tied the knot on June 22, 2003, at an intimate ceremony in the presence of their closed ones and family members. The duo first met each other on the sets of Big Daddy.

Jackie who formerly used to follow Christianity even converted her religion and converted to her husband's religion Judaism.

Sadler wore a Carolina Herrera gown with a draped bodice and spaghetti straps on her wedding. She converted to her husband's religion, Judaism in 2000.

Jackie Sandler has an estimated net worth of $5 million dollars which she generates from her acting and modeling. In 2007, Sandler and her husband donated $2100 to former New York City Republican mayor Rudy Giuliani's presidential campaign.

Her first daughter is Sadie Madeline Sandler ,she was born on 6th May 2006 .