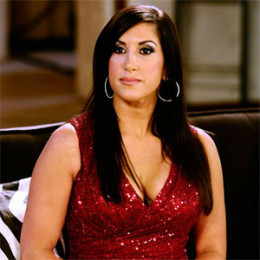 Jacqueline Elizabeth Laurita, an American reality TV cast member is popularly known as Jacqueline Laurita. She came to popularity after appearing in the TV series, The Real Housewives of New Jersey in 2009. Today she is a married woman and has three children, one from her previous marriage.

Born as Jacqueline Elizabeth Grippe on 26th April 1970 in Las Vegas, Nevada, she is an American and belongs to White ethnicity. She was raised by her parents, Jerome Grippe (a retired army colonel) and Bonnie Grippe along with her siblings Robert Grippe and Thomas Grippe.

Before switching her profession to acting, she was a licensed a cosmetologist and used to work as a beautician.

Laurita began her career after appearing on an American TV series, The Real Housewives of New Jersey in 2009 alongside Teresa Giudice, Melissa Gorga, Joe Giudice, Caroline Manzo, Kathy Wakile and others.

Doing the series for several years, she took a break in 2014, and as of April 2017 she again made a comeback and joined the series in the eight season. Apart from that she also appeared in another American series, Manzo’d with Children opposite Caroline Manzo, Albert Manzo, Chris Manzo, Lauren Manzo and Albie Manzo.

In 2012, Laurita worked in a drama film named, Bad Parents by Caytha Jentis. Besides acting, she also co-wrote some books like Get It!: The Busy Girl's Guide to Getting Your "It" Together: A Beauty, Style, and Wellness Book along with Jene Luciani in 2016.

Laurita married her second husband, Chris Laurita in 2002 after meeting for the first time through Chris’s brother and one of her mates.

Today the couple is blessed with their two sons named, Christopher and Nicholas. Laurita is not only the mother of these two boys but is also a mother of Ashley Holmes, a daughter from her first husband. Holmes is currently a mother of a child from her fiancé, Pete Malleo.

Her first husband's name is Matt Holmes. Laurita and Holmes married in Las Vegas in an intimate ceremony in 1989, but the relationship did not last long and divorced in 1992.

The gorgeous reality TV star, Laurita is currently 47 years old and stands at the height of 5 feet 4 inches (1.63m). She earned a good amount from the TV shows, series and even from her books as well. As of 2017, Laurita has an estimated net worth of $5.5 million.

Apart from this she also owned a company, Signature Apparel LLC. But in 2009, she along with her husband filed a Chapter 7 and Chapter 11 bankruptcy, and by 2010 the business dissolved.

After they filed the bankruptcy, the creditors became suspious and reported that they might have intentionally defrauded the creditors and spent all the amount in their own interest. Later, the court ordered them to pay $7.8 million to the creditors.

Not only this, the couple was even forced to keep their house for $2.85 million in the market into foreclosure as they became unable to pay their monthly payment of $10,846.

After the divorce with her first husband, she married Chris Laurita. The couple is still together with no such news about their divorce and extramarital affairs.

Some years after the marriage of the couple, they welcomed their first child on 1st December 1990 and named her Ashley Homes. Currently, Ashley is a mother of her first child, Pete Malleo from her fiance.

Jacqueline Laurita and Chris Laurita welcomed their first child on 24th May 2002 and named him Christopher Laurita. He is currently 15 years old.

The second son of Jacqueline Laurita and Chris Laurita was born on 11th June 2009 and named him Nicholas Francis Laurita. He was diagnosed with autism when their parents faced bankruptcy.