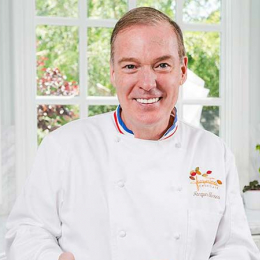 James Beard Award-winning chef, Jacques Torres is one of the top-ranked chefs in the U.S who has made his fortune out of his career. Owning some huge retail shops in New York, he also presents himself as a judge and co-host in a few American cooking shows. Plus, he wrote some books with recipes, which costs a good amount of money in the market.

Jacques Torres is happily married to a chocolatier Hasty Khoei in 2007. They first met when she worked under Torres in his chocolate factory. The couple shares a beautiful relationship which is of over a decade old so far. 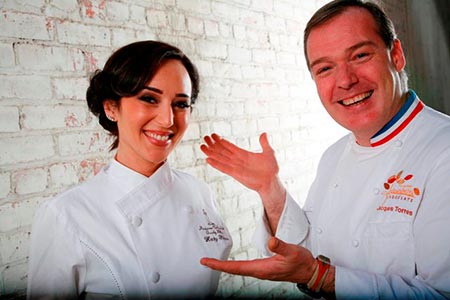 In addition, the husband and wife were blessed with a son Pierre Torres on August 19, 2016, and a daughter, Jacqueline Torres in April 2019. Torres announced the birth of her second child via Instagram on April 5, 2019.

Welcome to the world my new truffle Jacqueline! You and my little bonbon Pierre have made our family completeMerci wifey! My heart is full of love for each of you

They've been keeping secret of their personal life from media, which helps them maintain a joyous intimate life. Moreover, the chocolate master is pretty stable in his married life and it doesn't look like the couple will face any troubles in their relationship.

Apart from his married life, he dated a girl named Kris Krude in 1980 which lasted for around two decades. He kept his dating life private and haven't let any information about his girlfriend to the media.

Jacques Torres kicked off his passion towards the pastry at the age of 15 with an apprenticeship at a pastry shop. Graduating first in his class, he completed his apprenticeship requirements in two years. Further, he attended culinary school to get a Master Pastry Chef Degree while he was working with two stars Michelin chef Jacques Maxim at Hotel Negresco.

He became the youngest person to win the Meilleur Ouvrier Patissier de France competition in 1986. To achieve his dream, he later moved to the United States and worked as a corporate pastry chef for Ritz Carlton Hotel in 1988. He gained experience working as an Executive Pastry Chef in Le Cirque for 11 years. 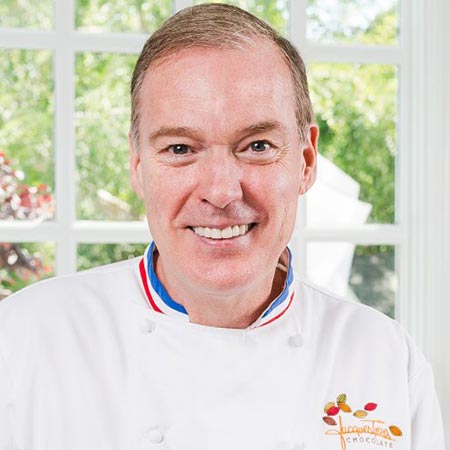 He felt he needs to establish his own shop and so he did in 2000. Opening a chocolate factory and a retail shop in Brooklyn, New York, in 2000, he currently owns eight Jacques Torres all over New York. In 2010, He prepared a fundraiser of $30,000-per-couple dinner, which was put on by President Barack Obama. He later opened a 5000 square feet museum on his flagship store in Manhattan on 2017.

Apart from his pastry business, Torres launched a television show 'Dessert Circus with Jacques Torres' in 1998. Later, he hosted 'Chocolate' show on the Food Network. As of 2019, he works as a judge and a co-host alongside Nicole Byer, on a comedy show Nailed It which broadcasts cooking theme.

How Much Net Worth Does Jacques Torres Make As Chef? Also Know His Earnings and Salary

Also known as 'Mr. Chocolate' has a busy career which delivers him a handsome net worth of $4 million. He makes his money from the business he runs over the U.S. His seven retail shops sells over $10 million a year of chocolates and confections.

Check out the video where he talks about how he doubled his business!

Torres published four recipe books which earn him some good money. His Books and its cost on Amazon are:

1. Jacques Torres' Year in Chocolate: 80 Recipes for Holidays and Celebrations

Born on June 14, 1959, in Algiers, French Algeria, Jacques grew up in a fishing village in the South of France called Bandals. He graduated being first in his class for an apprenticeship at a small pastry shop. He also attended culinary school to earn a master degree in Pastry Chef. 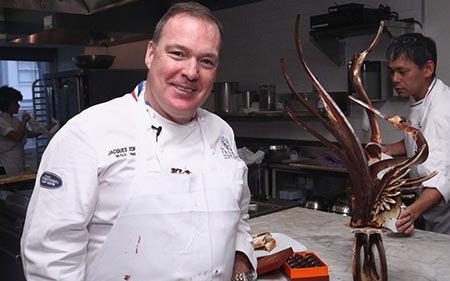 Torres stands a height of 5'9" which equals 1.80 meters and a weight of 70 kg (154 lbs). His hair and eye color is light brown. He is of French Algerian origin who follows Christianity.

Pastry chef Jacques Torres married a chocolatier Hasty Khoei in 2007. Khoei previously worked under him in a chocolate factory.