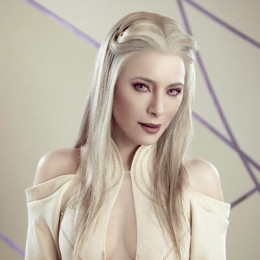 Jaime Murray is an English actress. She is known for her role in series named Hustle, Dexter, Lila West. She is also known for her recurring role in Spartacus: Gods of the Arena Wells. Her mother is Elaine and her father is Billy Murray. Her father is an English actor. She had been diagnosed with dyslexia just before taking her A Levels. In London School of Economics she studied philosophy and psychology.

Previously, she dated Dan Abrams, Corbeau Bleu, Ryan Gosling, Bernie Cahill but none of her relationships run on longterm.

She married Bernie Cahill in May 2014. Cahill is a partner in an entertainment management company.

Jaime Murray holds an estimated net worth of $3 million.

She tasted stardom by miming the lyrics of original video stretch and Vern’s dance track “I’m Alive” in 1996.

In 2008 she had acted in the leading role in The CW’s Valentine but the show got canceled by the end of the month. She had also guest appearance on Fox show named The Finder. Currently, she is doing a series of Syfy named Defiance which premiered on 2013 April.

She is married to Bernie Cahill. He is a partner in an entertainment management company. She is happily married.