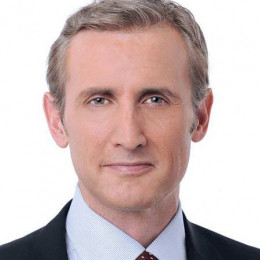 Dam Abrams is an intelligent and charming American television host, web entrepreneur, legal commentator, and author who is widely famous as the former anchor of Nightline and also as the Chief Legal Affairs Anchor for ABC News. He is also a sole founder of seven web properties and also the digital media strategy firm. He is the son of Floyd Abrams and Efrat Abrams. He completed his bachelor degree in political science from the Duke University. He started his career as a reporter for Court TV where he covered the OJ Simpson case. Later he left the job and worked as a chief legal analyst for NBC News and also as General Manager of MSNBC. He has also published various articles in New York Times, the Wall Street Journal, USA Today magazine.

Dan Abrams was born in 1965 in Manhattan, New York, USA, to parents, father Floyd Abrams and mother Efrat. He has an American nationality with white ethnic background. While for his religious beliefs, he is a Jew.

The journalist earned his Bachelor in Arts degree in Political Science from the Duke University in 1988. Later, he received a Juris Doctor from the Columbia Law School. He was there for three years from 1989 to 1992.

Regarding Dan Abrams' career, he started out as a reporter when he was still in college. When he was at the Duke University, he used to anchor newscasts for the student-run channel, Cable 13. Abrams professional career started only when he worked as a reporter for the Court TV for just over 5 years. He covered high-profile legal cases for Court TV until May 1997.

After that, he joined the world-renowned channel, MSNBC in May 1995 and gave his expertise and skills to the channel for over 13 years. He started out at the channel as an NBC News Reporter then, he jumped on to become the host of his own show, The Abrams Report until June 2006.

Following that, he became the General Manager of the channel for one and a half years before moving to become the host of Verdict with Dan Abrams. His last position in MSNBC was as a Chief Legal Correspondent for almost 2 years.

In July 2009, Dan established his own media company, Abrams Media Network where he has been the CEO of until now. In March 2011, he joined ABC Television as a Legal Analyst. He also acts as a substitute anchor of Good Morning America for the channel. Good Morning America is host by top-tier journalists such as Sara Haines, David Muir, and Sam Champion.

Apart from this, Dan is also an author as he wrote a book, 'Man Down: Proof Beyond a Reasonable Doubt That Women are Better Cops, Drivers, Gamblers, Spies, World Leaders, Beer Tasters,  Hedge Fund Managers, and Just about Everything Else'. He is also the author of Lincoln's Last Trial: The Murder Case That Propelled Him to the Presidency.

As of 2018, Dan Abrams' net worth is estimated to be around $16 million. He earned his worth from the shows he has hosted and his company. His book collection also helped him earn his worth.

Although we know of his total net worth, we are quite unsure about his salary per year. According to several data analytics sites, an average anchor earns over $83K per year. So, without a doubt, Dan Abrams earns well over a $100 thousand annually from just his journalism skills.

Likewise, his first book is still in the market for over $16 for its hardcover edition. And with that, his second book is also currenlty priced at over $17 on Amazon. So, enough for him to have such an astounding net worth.

Exploring his personal life, Dan Abrams is not married yet, but he is in a long-term relationship with his girlfriend, Florinka Pesenti. He also has a child with his girl. His son, Everett Floyd Abrams was born in 2012.

Caption: Dan Abrams with his child

Abrams met her in a party in 2009 and have been together since then. Currently, he lives with his girlfriend and his child in New York.

Before Florinka, Dan Abrams was in an engaged relationship with Elisabeth Rohm. However, their relationship ended in 2005.

Currently, there are no rumors of Dan Abrams getting married to his girlfriend.

He is the only son of the family. His picture along with his mother can be found in different sites.