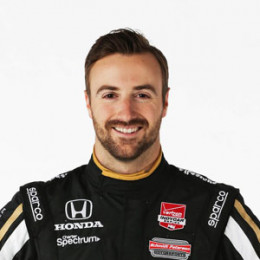 James Hinchcliffe is a race car driver from Canada currently competing with Schmidt Peterson Motorsport in the IndyCar Series. He also competed on the 23rd season of Dancing With The Stars and placed second. Moreover, James hosts his own podcast, The Mayor on Air with James Hinchcliffe. From 2006 to 2007 he raced in the A1 Grand Prix.

James Hinchcliffe was born in Oakville, Ontario, Canada on December 5, 1986. He is one of the children born to Jeremy Hinchcliffe and Arlene Hinchcliffe. James was brought up along with his brother Christopher and sister, Rebecca.

He completed high school education from Oakville Trafalgar High School. After that, he moved to McMaster University for graduation. James Hinchcliffe belongs to Canadian nationality, and his ethnicity is a white.

After providing commentary for the Eurosport in 2006 and 2007, James moved to A1 Team Canada in A1 Grand Prix. There he competed in the sprint race and finished in the eighth position. Currently, he is competing in the IndyCar Series with Schmidt Peterson Motorsports since 2015.

Hinchcliffe also participated in the 23rd season of the “Dancing With the Stars” in 2016 with pro dancer Sharna Burgess and stood second.

The 30-year-old, James Hinchcliffe is yet to be married. Currently, he is in a relationship with his girlfriend, Canadian actress, Rebecca Dalton.

The couple shared the fascinating love story in an interview, which was made public on March 28, 2017. The couple knew each other from way back. As a matter a fact, Rebecca a.k.a. Becky was his prom date.

Hinchcliffe shared that she was the prettiest girl in school and he couldn't ask her out on a date, so he proposed Becky to go as a friend.

Well, there was no romantic spark between the two during that time. The pair only started dating in 2015 after James met with a fatal accident which got the attention of his crush. James said,

“When you try to kill yourself at the Indianapolis Motor Speedway, it brings a lot of unexpected attention on to you.”

Hinchcliffe and his girlfriend share a lot of lovey-dovey photos on Instagram and seem both are happy with each other. Maybe soon they will turn their romantic relationship into a marital bond.

The popular car race driver James Hinchcliffe garners a huge amount of net worth. He also receives a good amount of salary from current IndyCar Series with Schmidt Peterson Motorsports. But his exact finance is still a matter of curiosity.