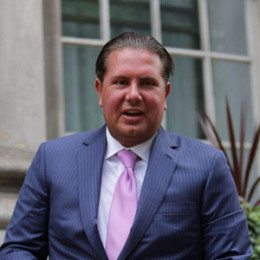 James Stunt is a British Business Executive and a well-known businessman. He is an art collector and dealer who owns gold refining factories. He rose to popularity after his high-profile marriage to fashion designer and heiress Petra Ecclestone.

James Stunt was born on 21 January 1982 in London, England. He was born to his father Geoffrey Stunt and mother Lorraine Stunt. Stunt also has a brother named Lee Stunt.

As a famous businessman of England, James Stunt has a various source of income. He is a financier who expanded his business by Mining Investments, TransAtlantic Shipping Industry, Gaming Industry, an entrepreneur, philanthropist, and collector.

At the young age of 21, Stunt invested in cargo vessels and stepped into the shipping sector. Later, he turned his investments into private finance, property, gold mining, and gambling.

Stunt came into limelight after his marriage with the daughter of F1 boss Bernie, Petra Ecclestone. As his current state business world and reputation, Stunt has faced a number of unsuccessful companies loss before 2011.

Stunt began building his fortune in the summer of 2010, James Stunt collaborated with another wealthy businessman Simon Gold, to be the directors of the firm named Select Global Management.

After the Companies House announced of its compulsorily to close the firm it was struck off after three months. The same consequence came in between two business partners in 2008, SGA Management.

James Stunt left the company after ten months, whereas Gold stayed till the Companies House again announced its intention to strike it off. Following his own business affairs from the seventh floor of a luxury building in Curzon Street.

Likewise, his Stunt Acquisitions, capital boosted to £3.5 million. Regarding his Stunt & Co gold refining business, he expected to show a transaction of £100 million in its first year of establishment.

James Stunt earns a heavy amount of money as an entrepreneur, businessman, and business executive. As of 2018, Stunt's total net worth is estimated to be £5.5 billion.

After his former marriage in 2011, Stunt bought a luxury mansion in Los Angeles, a French chateau mansion with over 123 rooms worth $150 million. Later the house was a sale for $200 million.

He has more than 200 vintage and luxury cars. Including some of his recent sports cars a unique modified Lamborgini Aventador($4.5 million). The car was customized by Mansory to add to his huge car collection. After that he bought, one of the rare car Porsche Carrera GT($1.2 million), among his other vintage and luxury rides like Rolls Royce, Bentley, Range Rover and many more.

Stunt has also various notable works to grow his art collection that includes works by, Sir Godfrey Kneller, Monet, Picasso, Degas, and many other sources. He owns a Van Gogh painting worth $95 million, and $110 million worth Da Vinci Painting.

James Stunt married Petra Ecclestone in August 2011 during an Italian Ceremony. The couple first met on a blind date in 2006. At the marriage, Petra Ecclestone appeared with a £80,000 Vera Wang dress, with a ceremony that cost £12 million.

After a few years, the couple divorced as granted by a family court judge just after five minutes of the speedy hearing. During an interview James Stunt said,

'' I am devastated that my marriage has broken down. I love Petra and our children.''

The divorce was settled as Mr. Stunt left £100m mansion, along with Lamborghinis, Rolls Royce, and Range Rover.

His wife won the custody of her children. He also paid £5 billion as a divorce settlement.

James Stunt married Petra Ecclestone after dating for several years. They met for the first time in 2006 on a blind date. The pair shares three children together.

She is the first daughter of James Stunt and Petra Ecclestone.

He is the youngest child of the pair.