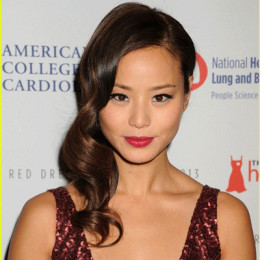 Jamie Chung is an American actress and a former reality television personality. She came into recognition after appearing in the MTV reality series The Real World: San Diego. She has been the most successful alumna of the Real World. She has been active in the industry since 2004. Her parents are of Korean descent who had emigrated to States. She has an older sister. They are the second generation Korean Americans. Her parents own a hamburger restaurant.

Two years later, the pair exchanged vows in October 2015 at the El Capitan Canyon resort in a three-day ceremony in Santa Barbara, California.

Literally running around all afternoon in back-to-back meetings wearing the most comfortable shoes. It's all about the details and I'm digging the block heel and vinyl strap on the Liya. I love these so much that I'm featuring them for another #instantkarma giveaway! To enter, please follow @42goldshoes and @nordstrom and tag your bestie in the comments below! 5 lucky winners will be picked at random to test out how comfy the Liya is. You be the judge! Giveaway closes Thursday, March 21 at 5PM PST. This giveaway is in no way affiliated with, endorsed, or sponsored by Instagram. #OneOf42Gold #ad @janawilliamsphotos_

She gained wide popularity playing in The Real World: San Diego in 2004. Subsequently, she performed in its spin-off show, Real World/Road Rules Challenge: The Inferno II.

She celebrated the launch of the new shoewear line with Scheana Shay in March 2019.