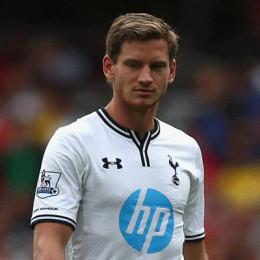 Jan Bert Lieve Vertonghen is a Belgian football player. He plays for Belgian national team and for English club named Tottenham Hotspur. He is well known for his offensive prowess and powerful shooting ability. He is a left-footed player and plays as a defender. Although he played as a defender he is equally good on the left side and center back as well.

Vertonghen is living a blissful married life with his wife Sophie de Vries. The pair have a daughter and a son together.

He is active on social media where he frequently shares adorable images of his wife and kids.

He amassed an estimated net worth of about $5 million as of 2019.

His professional football career had started from signing a contract with AFC Ajax. In 2006 he had made his debut in Champions League Qualifying Round and won the game too. He again made his debut in the senior team on 2007. In 2008 he also got selected for the Olympics. After seasons 2011-2012 he became one of the best players of Ajax.