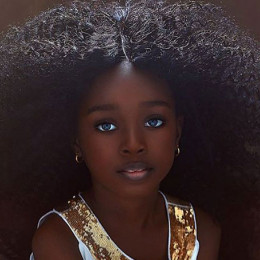 Becoming a star at a young age is a milestone which only limited people can achieve. Using various modern means of communication, one can achieve both name and fame. A photogenic five-year-old Nigerian girl Jare Ijalana who is stunning the modeling platform through her "doll-like" appearance with piercing eyes and irresistible hair.

Who is Jare Ijalana? Know about her Personal life!

Jare Ijalana is a famous Nigerian girl who is counted among the most beautiful young girls around the globe. The 5-year-old Nigerian kid was chosen along with her two sibling sisters for the photoshoot by lifestyle photographer Mofe Bamuyiwa.

Ijalana rose to limelight when Mofe Bamuyiwa, a wedding photographer from Nigeria took a number of stunning photos while Jare was just 5 years old. In addition, she uploaded beautiful pictures of her on social media and soon became an overnight viral sensation.

Her gorgeous looks are able to capture the hearts of netizens around the world. The starlet and her two sisters (J3 sisters) amassed over 134,000 followers on Instagram. At present, Ijalana is busy with photoshoots and her modeling career.

Jare at her one photoshoot for the Independence day of Nigeria.

Mofe captioned one of her posts,

“I want to portray the interception between her childhood and adulthood so both stay timeless!”

“I could have made her smile and make her laugh out loud but I put her in their natural moments for us to see through their eyes!”

The adorable pictures of Jare broke the internet and her sisters Jomi Ijalana, 7, and Joba Ijalana, 10, also grabbed equal love and praise. Three sisters now have their own Instagram account thanks to Mofe who inspired the mother of the children to launch those pretty girls on Instagram.

Oh yes she’s human ! She’s also an angel ! “J A R E “ I want to portray the interception between her childhood and adulthood so both stay timeless ! I could have made her smile and make her laugh out loud but I put her in their natural moments for us to see through their eyes ! Posing them as adults ! Was my trick to create it a timeless portrait ! J A R E , when you clock 21 remember to do same pose and style TEAM Muse : @the_j3_sisters Make up by Dammy of @iposhlooks Creative style direction @mofebamuyiwa Hair by @totalshopwigs Hair styled by @hairkarved Styled by @styledbyseun Assisted by @adebimpe_aj @ernest_chuxx @official_bigjosh #bmbstudio #bmbphotography #mofebamuyiwa #kids #kidsphotography #artsy #love #light #childphotographer #familyphotography

Just like Jare, Anna Pavaga was crowned as the world's most beautiful girl who started modeling at the age of three. But, her spot seems uncertain as a new young diva has arrived in the modeling.

Ijalana, the 6-year-old internet sensation made her first runway appearance in London Fashion Week on April 9, 2020.  Legit.ng reported that Jare share her plans to walk the runway with her fan followers on social media.

Prior to the fashion show, the younger celebrity shared the good news with her fans in a cute video where she was seen strutting for the camera.

Despite being so young, Jare can be seen fulfiling her dreams on the runway. Photos of her strutting in various designs were shared on the page.

What is the Net Worth of Jare Ijalana?

Jare Ijalanais a modeling kid and is doing campaign after catching the fame in social media and she is estimated to have a net worth of $100,000. Moreover, she is believed to have a salary of $42,560 per year as a child model.

Jane with her two sisters Jomi Ijalanab and Joba Ijalanab at some photoshoot.

As soon as Jare was discovered she started her first modeling campaign along with her two sisters for BMB studio. As of now, the model is busy in her modeling campaigns with various brands.

Jare Ijalana's Wiki-Bio; Most Beautiful Girl In The World!

Jare Ijalana was born on January 1st of 2014 in Nigeria. The black-eyed young model holds Nigerian nationality. She lives along with her two sisters who are also involved in modeling along with her.

I have looked into a future confident of possibilities. I am Bold and Beautiful. Part of diverse dimension. Drum my beat that tomorrow will birth GREATNESS. I will walk, walk will I Only for the SPOTLIGHT. Bold and Beautiful. #africanbarbie #chidmodel #Jare #stylishkids J. A. R. E: @the_j3_sisters :@bmb Hair stylist : @hairkarved

In fact, the famous daily magazine, People announced Jare as the Most beautiful girl of the world officially on their page. Here, you can see one of the tagged posts of Jare on twitter.

Jare Ijalana, a Nigerian 5 year-old girl has been hailed as the 'most beautiful girl in the world', by People magazine. pic.twitter.com/bP1mXc8E8r

She is also popular as Black Barbie and African Barbie. The gorgeous young model already garnered a lot of love and fame with her innocent and adorable appearance. Further, she owns a beautiful pair of black eyes and matchless black Afro-textured hair.