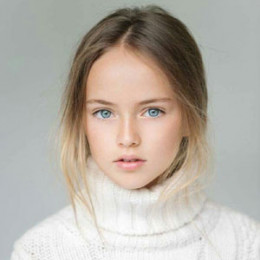 An internet personality, Kristina Pimenov in Russian child model and actress. She entered the fashion industry and exhibited glamor, while she was only 4 or 5 years. Undoubtedly, Kristina is one of the most successful supermodels of the younger generation.

Kristina Pimenov was born in Moscow, Russia on December 27th, 2005, to Glikeriya Shirokova and Ruslan Pimenov. Her dad is a former football player, and her mother is a former model. Kristina attended Moscow elementary school for primary education.

Kristina Pimenov was raised in her birthplace Moscow with her younger sister Natalia Pimenova. She also studied the school of rhythmic gymnastics from the age of four. Moreover, Kristina was trained many years by Olga Kapranova.

After that, Kristina went to Los Angeles to pursue her modeling career. She belongs to Russian nationality and ethnicity wise she is white.

At the age of 3, Kristina Pimenov began her modeling career. She gathered the attention of a modeling agency President Kids after her mother arranged the photo session of her in Moscow studio.

In 6 month Kristina Pimenov was taught fashion show bases, skills of behavior on a casting, acting skills. She performed as a runway model, before hitting the age of 10.

Kristina also featured on the cover of Vogue Kids in April 2015. She is cast as Dasha in the upcoming horror-thriller film The Russian Bride along with Corbin Bernsen and Oksana Orlan.

Kristina Pimenov is still very young and is currently engaged in her profession. She is just 11 years old and still to make a boyfriend.

Kristina Pimenov’s mother manages her social networking account, and she has faced a lot of criticism as her mother uploads rather sexual photos of her daughter. Other than that, she is more active on Instagram, where she has 1.8 million followers.

Kristina Pimenov is an upcoming actress and model. Kristina gained huge public attention and received success at a very early age. Her actual earning is yet to be evaluated but looking at her success rate; she must probably have a six-figure worth.

Kristina Pimenov has bowled over half the world with her long blonde colored hair and gorgeous blue colored eye. She stands at a height of 4 feet 11 inches.